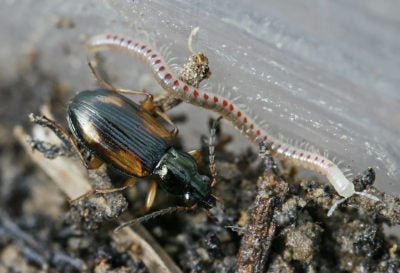 What is a Spotted Snake Millipede?

Centipedes are more active than millipedes and, when discovered, make a run for it while millipedes either freeze in their tracks or curl up. Millipedes hide in the soil or under logs and stones during the day. At night, they come to the soil surface and sometimes climb up onto plants.

Spotted snake millipedes are a little over half an inch (1 cm.) in length, about the width of pencil lead. They lack eyes and have bodies that are pale white to cream in color with pinkish spots on their sides that represent defensive glands.

These soil inhabitants feed on decaying plant material and lay their eggs in the soil during spring and summer, either singly or in small batches. The eggs hatch into miniature versions of the adults and can take several years before they reach maturity. During this period of adolescence, they will shed their skins 7 to 15 times and increase their length by adding additional segments to their bodies.

Blaniulus guttulatus can sometimes be found feeding inside bulbs, potato tubers, and other root veggies. They are usually following the path of least resistance, enlarging the damage already done by slugs or another pest or disease. Healthy plants are usually undamaged by millipedes due to their relatively weak mouthparts that are more suited to already decomposing matter.

Garden crops that are susceptible to spotted snake millipede damage include:

Feeding damage at the roots can cause the rapid death of these plants.

Generally speaking, millipedes rarely cause any serious damage, so it isn’t necessary to control them with any chemical controls. Instead, practice good garden sanitation by removing crop residue and decaying plant material. Also, remove any old mulch or decomposing leaves that may harbor millipedes.

When strawberries are becoming damaged by millipedes, it’s probably because the fruit is resting on the soil. Place straw or hay around the plants to lift up the fruit. In the case of damage done to potatoes, the millipedes are probably just following the damage done by slugs, so steps should be taken to eliminate the slug problem.

Chances are good that any minor millipede problem will sort itself out. Millipedes have many natural enemies such as birds, frogs, toads, hedgehogs, and ground beetles that are always searching for a tasty millipede morsel.