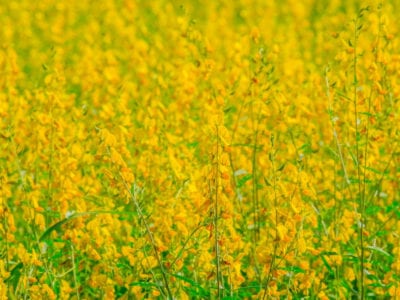 It is said that “to err is human”. In other words, people make mistakes. Unfortunately, some of these mistakes can harm animals, plants, and our environment. An example is the introduction of non-native plants, insects, and other species. In 1972, the USDA began to closely monitor the import of non-native species through an agency called APHIS (Animal and Plant Health Inspection Service). However, prior to this, invasive species were introduced to the U.S. all too easily, with one such plant the showy crotalaria (Crotalaria spectabilis). What is showy crotalaria? Continue reading for the answer.

Showy crotalaria, also known as showy rattlebox, rattleweed, and cat’s bell, is a plant native to Asia. It is an annual that sets seeds in pods that make a rattling noise when they are dried, hence its common names.

Showy crotalaria is a member of the legume family; therefore, it fixes nitrogen in the soil just as other legumes do. It was for this purpose that showy rattlebox was introduced to the U.S. in the early 1900s, as a nitrogen-fixing cover crop. Since then, it has gotten out of hand and become labeled as a noxious or invasive weed in the Southeast, Hawaii, and Puerto Rico. It is problematic from Illinois down to Florida and as far west as Oklahoma and Texas.

Showy rattlebox is found along roadsides, in pastures, open or cultivated fields, wastelands, and disturbed areas. It is pretty easy to identify by its 1 ½ to 6 foot (0.5-2 m.) tall flower spikes, which are covered in late summer by large, yellow, sweet pea-like flowers. These flowers are then followed by the inflated cylindrical rattling seedpods.

Because it is a legume, showy crotalaria was an effective nitrogen-fixing cover crop. However, the problem with crotalaria toxicity became apparent immediately as livestock exposed to it began to die. Showy rattlebox contains a toxic alkaloid known as monocrataline. This alkaloid is toxic to chickens, game birds, horses, mules, cattle, goats, sheep, pigs, and dogs.

All parts of the plant contain the toxin, but the seeds have the highest concentration. The toxins remain active and dangerous even after the plant has been cut and left to die. Showy crotalaria in landscapes should be cut and disposed of immediately.

Showy rattlebox control measures include regular, persistent mowing or cutting and/or use of a growth-regulating herbicide. Herbicide control measures should be done in spring when plants are still small. As the plants mature, their stems become thicker and tougher and they are more resistant to herbicides. Persistence is the key to getting rid of showy rattlebox.