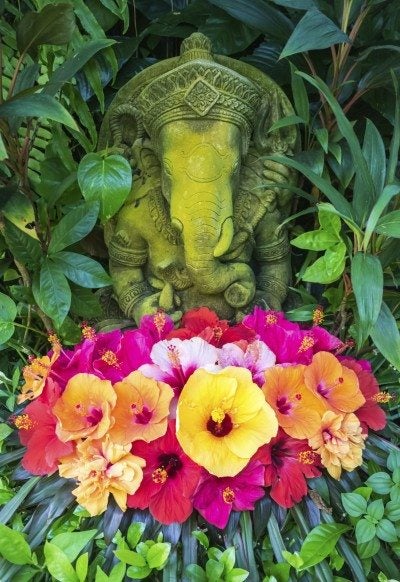 What is a Hindu garden? This is a complicated, many-faceted subject, but primarily, Hindu gardens reflect the tenets and beliefs of Hinduism. Hindu gardens often include refuge for birds and other wildlife. Hindu garden designs are guided by the principal that everything in the universe is sacred. Plants are held in particularly high regard.

Hinduism is the world’s third largest religion, and many historians believe it is the world’s oldest religion. It is the predominant religion in India and Nepal, and is widely practiced in countries around the world, including Canada and the United States.

Hindu temple gardens are places of worship, designed to connect people with gods. The gardens are rich in symbolism that reflects Hindu values.

A Hindu garden is a tropical paradise resplendent with beautiful tropical flowers that explode with bright color and sweet aroma. Other features include shady trees, walkways, water features (such as natural ponds, waterfalls, or streams), and quiet places to sit and meditate.

Most Hindu Gardens include statues, pedestals, lanterns, and potted plants. Hindu temple gardens are carefully planned to reflect the belief that everything is connected.

Hindu garden plants are many and varied, but they are usually suitable for a lush, tropical environment. However, plants are chosen based on the growing zone. For example, a Hindu garden in Arizona or southern California may display a wide variety of cacti and succulents.

Nearly any type of tree is suitable. As you walk through a Hindu garden, you might see:

Fruiting or flowering trees may include:

Planning a Hindu garden presents a nearly endless choice of blooming plants and vines such as: