Arctic Tundra Plants And Their Adaptations 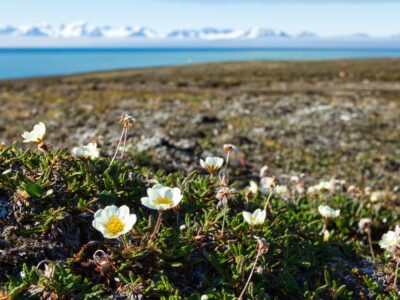 Above the Arctic circle, temperatures are so low that only animals and plants that have adapted to the climate can survive. The land is tundra, characterized by permafrost, a layer of soil that remains frozen year-round. So how do tundra plants survive?

Plant Life of the Tundra

Are there plants in the Artic? There are more than a few plants. Some 1,700 species of plants live in this ecosystem, and these include flowering plants, dwarf shrubs, herbs, grasses, mosses, and lichens.

Since much of the soil is permanently frozen, plants only have a thin soil layer – termed the active layer – that thaws every summer, making shallow roots a necessary adaptation. The active layer of soil is free from ice for only 50 to 90 days.

Plants from the Arctic Tundra

You’ll see no trees in the Arctic given the shallow soil, the cold temperatures, and the short growing season. In fact, “tundra” is Finnish and signifies “treeless.”

Rather, the plant life above the Arctic circle is largely made up of very small plants growing close to the ground. This growth pattern is an adaptation that allows plants to resist the effects of cold temperatures. It also limits foliage damage from the impact of tiny particles of ice and snow that sweep through the tundra, driven by the harsh winds.

All plants that live in the tundra have adapted to survive. In addition to growing low and close together, they have developed the ability to grow under a layer of snow. Since the ground is often covered with snow through June, this allows them to continue living during the colder seasons.

Most show a small leaf structure as well. This permits them to retain stored water rather than losing it through the leaf surface. In addition, all or part of the plant stems, leaves, and even flowers are covered with tiny hairs, an adaptation that protects them against drying out in the winds.

The plants have also developed the ability to carry out photosynthesis – using sunshine to create energy – in extremely cold temperatures and low light intensities. Flowering plants produce flowers quickly once summer begins. For example, the purple saxifrage, growing in a low clump, produces tiny, star-shaped purple blossoms so early that they are often seen above the snow cover.