Bad Vermiculture Odor: What to Do For Rotten Smelling Worm Bins 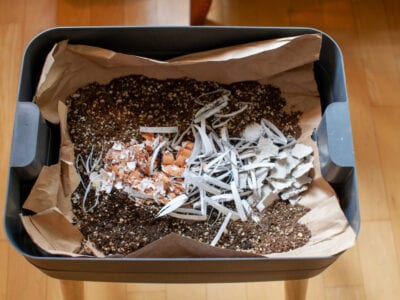 Vermicomposting is a great way to use up kitchen scraps without the hassle of a traditional compost pile. When your worms eat your garbage, though, things can go wrong until you get the hang of this composting method. Smelly vermicompost is a very common problem for worm keepers and one that is easily remedied. Read on to learn more.

When your worm bin smells bad, it’s easy to assume that you’ve really messed up. Although this isn’t an indication that everything’s well in the world of your worms, it’s not usually an insurmountable problem. There are a few common causes of rotten smelling worm bins.

Look at what you’re feeding your worms and how you’re feeding it. If you’re adding more food than the worms can eat quickly, some of it is bound to rot and stink. At the same time, if you don’t bury that food at least an inch under the surface of the bedding, it may start to smell before your worms get to it.

Certain worm-friendly foods, like onions and broccoli, naturally smell as they break down, but so do oily foods like meat, bones, dairy and oils — never feed these to worms because they’ll become rancid.

Vermiculture odor appears when your worm environment has a problem. Often, the bedding needs to be fluffed or more added to help soak up excess moisture. Fluffing the bedding and adding ventilation holes help increase air circulation.

If your worm farm smells like dead fish but you’ve been careful to keep animal products out of it, your worms may be dying. Check the temperature, moisture level, and air circulation and correct those items that are problematic. Dead worms don’t eat garbage or reproduce effectively, it’s very important to provide an ideal environment for your little composting friends.