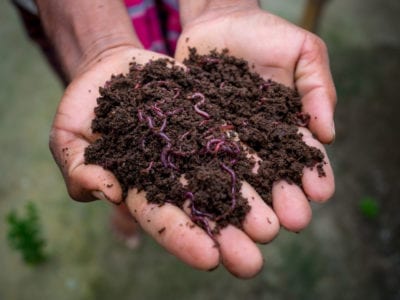 Composting worms can be helpful allies in the war on trash, but until you get the hang of vermiculture, worm death may complicate your efforts. Worms are generally pretty tough, but they have exacting environmental standards. If your vermicompost worms died, don’t give up — just reset your bed and try again. Read on to learn common reasons for composting worms dying.

Usually, worms dying in vermicompost systems can be traced back to one of a few problems: incorrect moisture levels, problematic temperatures, lack of air circulation, and too much or too little food. Keeping a worm farm means constantly checking it for these key items. Regular check-ups will also help you stave off pests if they begin to make trouble.

Moisture – Moisture must be present for worms to thrive, but too much is as bad as too little. Wet your bedding so that it’s just slightly damper than a wrung-out sponge and add more bedding if you’re going to be feeding something especially wet, like watermelon. The extra bedding will soak up the additional moisture the food produces, protecting your worms from drowning.

Temperature – Temperatures between 55 and 77 degrees Fahrenheit (12 and 25 C.) are ideal for earthworms, but they don’t tolerate violent temperature swings. Keep a thermometer handy and check the bin several times a day. If you notice the sun shining directly on the bin or if it’s hot where you live, move it to a shady spot to prevent cooking your worms to death.

Air circulation – Air circulation is a common cause of compost worms dying in their bin. Even if your bin came with plenty of pre-drilled air holes, they can become plugged, causing oxygen starvation. Sometimes, the bedding gets compacted and needs to be fluffed up to allow air to circulate inside the layers. Keep a close eye on these factors for worm success.

Food – Food is a tricky part of keeping healthy worms. As a rule of thumb, worms will eat about a half-pound (0.25 kg.) of food for every pound (0.5 kg.) of worms in your system. When they begin to breed and spread out, this number may increase, but you’ll have to monitor their consumption closely. Too little food may lead to your worms eating their own castings, which are poisonous to them.