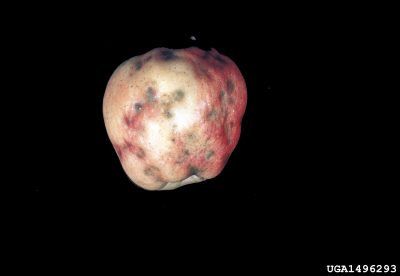 “An apple a day keeps the doctor away,” the old adage goes, and apples, indeed, are one of the most popular of fruit. Health benefits aside, apples have their share of disease and pest issues that many growers have experienced, but they are also susceptible to physiological disorders. One of the more common of these is apple bitter pit disease. What is apple bitter pit in apples and is there an apple bitter pit treatment that will get bitter pit under control?

What is Apple Bitter Pit Disease?

Apple bitter pit disease should more properly be referred to as a disorder rather than a disease. There is no fungus, bacteria, or virus associated with bitter pit in apples. As mentioned, it is a physiological disorder. This disorder is the result of a lack of calcium in the fruit. Calcium may be plentiful in the soil and in the leaves or bark of the apple tree but lacking in the fruit.

The symptoms of apple bitter are mildly water-soaked lesions on the skin of the apple that become evident beneath the skin as the disorder develops. Under the skin, the flesh is dotted with brown, corky spots that indicate tissue death. The lesions vary in size but are generally about ¼ inch (6 mm.) across. Apples with bitter spot do indeed have a bitter flavor.

Some apple varieties are more prone to bitter spot than others. Spy apples are frequently affected and with the correct conditions, Delicious, Idared, Crispin, Cortland, Honeycrisp, and other varieties may be afflicted.

In order to treat bitter pit, it’s important to know the genesis of the disorder. This might be a bit difficult to pinpoint. As mentioned, the disorder is the result of a lack of calcium within the fruit. A number of factors can lead to insufficient calcium. Bitter pit control will be the result of cultural practices to minimize the disorder.

Biter pit may to be evident at harvest but as the fruit is stored it may manifest, especially in fruit that has been stored for some time. Since the disorder develops when apples are stored for lengthy periods of time, if you are aware of a previous problem with bitter pit, plan to use your apples as soon as possible. This brings up the question, “Are apples with bitter pit edible?”. Yes, they may be bitter, but they won’t harm you. Chances are good that if the disease is evident and the apples taste bitter, you won’t want to eat them, however.

Large apples from small crops tend to be more prone to bitter pit than apples harvested during heavy crop years. Fruit thinning results in larger fruit, which is often a desirable thing but since it may foster bitter pit, apply a calcium spray to control bitter pit.

Excessive nitrogen or potassium seems to coincide with bitter pit as does fluctuating soil moisture; mulch around the tree with a low nitrogen material to help retain moisture.

Heavy dormant season pruning increases shoot growth because it results in higher nitrogen levels. Heavy shoot growth leads to competition between fruit and shoots for calcium which may result in bitter pit disorder. If you plan to prune the apple tree severely, reduce the amount of nitrogen fertilizer provided or, better yet, prune judiciously each year.