Apples
By: Becca Badgett, Co-author of How to Grow an EMERGENCY Garden
Printer Friendly Version 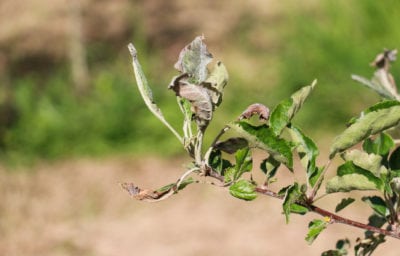 You’ve worked long and hard to get your apple orchard healthy and growing. You’ve done proper maintenance and expected everything to be fine for a great apple crop this year. Then, in spring, you notice that your buds don’t open. A few days later, you see they are covered in a powdery substance, which is a white to light gray powder. Unfortunately, powdery mildew in apples has attacked your trees.

These are the spores of the powdery mildew fungus (Podosphaera leucotricha). The flowers don’t develop normally, with the blooms likely to be greenish-white. They will produce no fruit. Leaves may be the first to be infected. These may be wrinkled and small.

Likely, apple tree powdery mildew will spread to the other trees in the orchard if it has not already. Eventually, it will infect new leaves, fruit, and shoots on nearby trees. By summer, much of the tree is browning. If fruit develops at all, it may be dwarfed or covered with russeted skin; however, the fruit is not affected until the disease reaches a high level.

Apple trees with powdery mildew are usually infected by spores that have blown in and overwintered in the tree. Powdery mildew develops best at temps of 65 to 80 F. (18-27 C.) and when relative humidity is high. Moisture is not needed for development. This fungus continues to grow and infect until it is stopped.

A fungicide spray should begin at the tight bud stage and continue until the growth of new shoots stops for powdery mildew apple control. Use a range of fungicides, with a third spray in early summer. Control in the home orchard with just a few trees may also be accomplished.

Resistant cultivars are less likely to develop major infestations. When replacing apple trees or planting new ones, consider disease resistance to avoid issues such as powdery mildew and other diseases.

Healthy trees are less likely to succumb to powdery mildew. Keep them vigorous with the right drainage, proper spacing to allow for good airflow, fertilization, fungicide sprays, and pest control. Prune apples at the right time with the right method. Well cared for trees are more likely to give back with an abundant harvest.