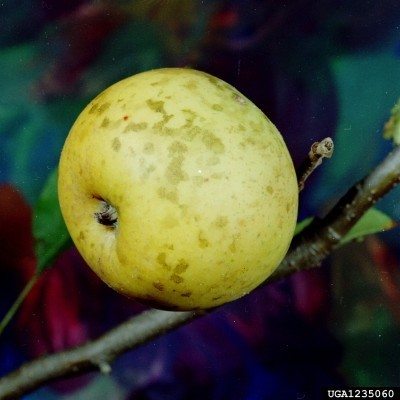 Growing apples is supposed to be easy, especially with the many new cultivars that require very little care. You just need to water, feed, and watch the tree grow — there are no tricks to apple growing, and yet some years it seems like nothing goes right. So what do you do if your entire crop turns black for no apparent reason? Keep reading to find out.

What is Sooty Blotch?

Sooty blotch fungus is a common problem in apple trees with poor air circulation or where humidity is high during the cool season. The fungus Gloeodes pomigena is responsible for the dark, smutty discoloration that makes affected apples look impossibly damaged. Fortunately for growers, sooty blotch on apples is a surface disease only; it may make your apples hard to sell at market, but if you’re eating them at home or canning them for later, a thorough wash or peel will remove all of the fungus.

Sooty blotch fungus requires temperatures between 65 and 80 degrees Fahrenheit (18-26 C.) and relative humidity of at least 90 percent to initiate germination. Under ideal conditions, an infection can take place in under five days, but typically requires 20 to 60 days in an orchard setting. Repeated chemical sprays are often used to keep this disease at bay, but both sooty blotch and flyspeck, fungal diseases that tend to appear together, can be controlled in the home orchard with careful environmental modifications.

Once your apples are covered in black, sooty fungal bodies, there’s not a lot you can do but clean each fruit carefully before using them. Prevention is a lot simpler than you probably imagine. Sooty blotch appears when temperatures are warming and humidity is high, so removing one of those factors can stop this disease in its tracks. Of course, you can’t control the weather, but you can control the humidity in the canopy of your tree. Sooty blotch on apples is primarily a problem of under pruned trees, so get in there and prune that apple tree like mad.

Apples are generally trained to two or three main trunks, with a middle that’s open. It may feel counter-intuitive to prune a fruit tree, but at the end of the day, it can only support so many fruits, no matter how many branches it has. Removing excess branches not only increases air circulation, preventing the build-up of humidity, but it allows the fruits that remain to grow larger.

Thinning fruits soon after they begin to swell is another way to help keep sooty blotch down. Remove every second fruit to prevent fruits from touching and creating microclimates where sooty blotch can thrive.