Diseases Of Blackberries – What Is Blackberry Calico Virus 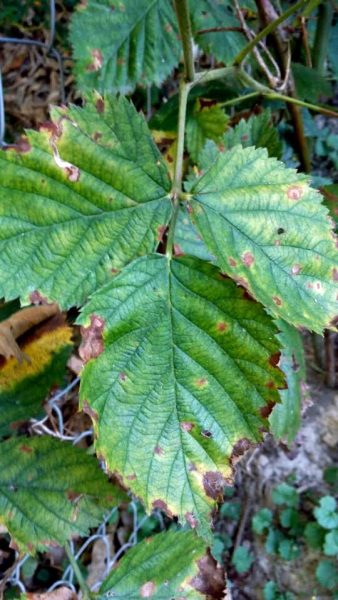 Memories of wild blackberry picking can hang with a gardener for a lifetime. In rural areas, blackberry picking is a yearly tradition that leaves participants with scratches, sticky, black hands, and smiles as wide as the creeks that still run through farms and fields. Increasingly, though, home gardeners are adding blackberries to the landscape and creating blackberry-picking traditions of their own.

When caring for home stands, it’s important to familiarize yourself with the diseases of blackberries and their remedies. A very common problem in certain cultivars is blackberry calico virus (BCV) – a carlavirus, sometimes known as blackberry calico disease. It affects thornless cultivars, as well as wild and standard commercial canes.

What is Blackberry Calico Virus?

BCV is a widespread virus belonging to the carlavirus group. It seems to be nearly universally present in older plantings of blackberries throughout the Pacific Northwest.

Blackberry calico virus-infected plants have a striking appearance, with yellow lines and mottling running through leaves and crossing veins. These yellow areas are especially prevalent on fruiting canes. As the disease progresses, leaves may turn reddish, bleach, or die completely.

Although the symptoms can be disturbing for a gardener experiencing it for the first time, BCV control is rarely considered, even in commercial orchards. The disease has little economic impact on the fruit-bearing capability of blackberries and is often simply ignored. BCV is considered a minor, largely aesthetic disease.

Blackberries used as edible landscaping may be affected more severely by BCV, since it can ravage the leaves of the plant and leave a blackberry stand looking thin in places. Badly discolored leaves may be simply picked from plants or you can leave BCV-infected plants to grow and enjoy the unusual leaf patterns the disease creates.

If blackberry calico virus is a concern for you, try certified, disease-free cultivars “Boysenberry” or “Evergreen,” since they show a strong resistance to BCV. “Loganberry,” “Marion” and “Waldo” are very susceptible to blackberry calico virus and should be removed if planted in an area where the disease is prevalent. BCV is often spread with new cuttings from infected canes.