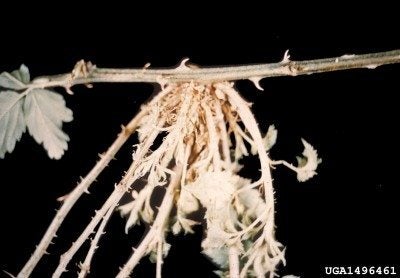 In my neck of the woods, blackberry bushes can be found everywhere from the forests to the suburbs to empty urban lots. Blackberry picking has become one of our favorite and free late summer pastimes. With as many berry bushes, I have seen my share of witches’ broom in blackberries. What are the symptoms of witches’ broom fungus, and is there a method for treating witches’ broom disease? Read on to learn more.

What are the Symptoms of Witches’ Broom Fungus?

Witches’ broom dates to the Middle Ages and aptly refers to tangled mats of twigs protruding from many woody plants. Since each broom is unique, how do you go about identifying witches’ broom fungus?

Generally, witches’ broom in blackberries is seen as a dense cluster of twigs and/or branches protruding out from the center of the plant. As you may guess, the protuberance looks much akin to a stereotypical “witches’ broom.” The broom may be small to several feet (1 m.) wide. So why are blackberries sometimes afflicted with witches’ broom?

Witches’ broom may be caused by a number of factors, but the root cause is simply stress. Stress may be caused by an infestation of mites or aphids, genetic mutation, fungal infection, environmental conditions, or phytoplasmas (single celled organism with a disorganized nucleus). Parasitic plants such as mistletoe also engender witches’ broom.

On other woody plants, such as the common hackberry, the root cause is thought to be powdery mildew fungus in conjunction with an eriophyid mite. The results in all cases are multiple shoots arising from a central point on a stem terminating in a mass that resembles a broom. Basically, all the shoots develop equally.

In the case of blackberries (and cherry trees) with witches’ broom, the anomaly is caused by a fungus or possibly a bacterial infection carried by insects from elm or ash trees.

There is no known treatment for witches’ broom on blackberries, or any other plant really. While the deformity is unsightly, it generally does not cause any long-term damage to berry plants. Many of the twigs in a broom will die back in the winter and the plant will emerge in the spring with renewed vigor. The presence of a witches broom will not affect the productivity or the health of the plant. If, however, they are bothering you, simply prune them out of the plant.

In fact, the appearance of witches’ broom in some plants may result in desirable traits such as dwarfism and increased branching. For instance, many of the most popular and highly recommended dwarf evergreen shrubs are the result of witches’ broom. Both ‘Montgomery Dwarf Blue Spruce’ and ‘Globosum,’ a rounded Japanese black pine, owe their desirability to the presence of witches’ broom.