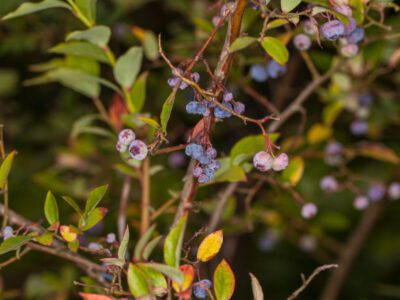 Stem blight of blueberry is especially dangerous on one to two year plants, but it affects mature bushes as well. Blueberries with stem blight experience cane death, which can result in the fatality of the plant if it is widespread. The disease has very obvious symptoms for which to watch. Failure to start blueberry stem blight treatment in a timely manner could mean more than the loss of the sweet berries; the loss of the entire plant is possible too. Knowing what to do when stem blight of blueberry occurs on your bushes can help you can save your crop.

Blueberry stem blight starts insidiously with just a few dead leaves in a single part of the plant. Over time it spreads and soon stems are exhibiting signs of the disease as well. The disease is most common in areas with poor soil or where excess growth has occurred. It is a fungal disease that lives in soil and discarded plant debris as well as several wild hosts.

Stem blight is the result of the fungus Botryosphaeria dothidea. It occurs in both high bush and rabbit eye varieties of blueberry. The disease enters through wounds in the plant and seems to be most prevalent in the early season, although infection can occur at any time. The disease will also infect host plants such as willow, blackberry, alder, wax myrtle, and holly.

Rain and wind carry the infectious spores from plant to plant. Once stems receive injury from insects, mechanical means, or even freeze damage, it travels into the vascular tissue of the plant. From the stems it travels into the foliage. Infected stems will rapidly wilt and then die.

Symptoms on Blueberries with Stem Blight

The first thing you might notice is browning or reddening of the leaves. This is actually a later stage of infection, as most fungal bodies enter the stems. The leaves do not drop but remain attached at the petiole. The infection can be traced to some sort of injury in the branch.

The fungus causes the stem to become reddish brown on the side of the injury. The stem will turn nearly black over time. Fungal spores are produced just under the surface of the stem which spread to neighboring plants. Spores are released all year except winter but the majority of infection occurs in early summer.

You can read all the blueberry stem blight info around and you still won’t find a cure. Good cultural care and pruning seem to be the only control measures.

Remove infected stems to below the area of infection. Clean pruners between cuts to avoid spreading the disease. Discard diseased stems.

Avoid fertilizing after midsummer, which would produce new shoots that can get cold frozen and invite infection. Do not over-prune young plants, which are most prone to infection.

Clear the area of nesting sites that termites might use. The majority of the insect damage that causes infection is through termite tunneling.

With good cultural care, plants that are caught early enough can survive and will recover the next year. In areas prone to the spread of the disease, plant resistant cultivars if available.