What Is Cherry Rust: How To Treat Rust On A Cherry Tree 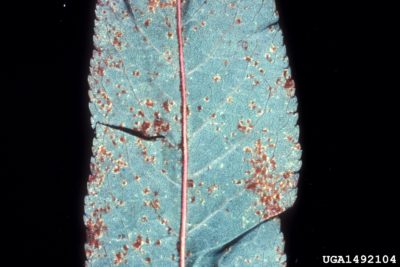 Cherry rust is a common fungal infection that causes early leaf drop in not just cherries, but also peaches and plums. In most cases, this is not a serious infection, and it probably won’t damage your crop. On the other hand, a fungal infection should always be taken seriously and managed as necessary to prevent it from becoming severe.

What is Cherry Rust?

Rust in cherry trees is a fungal infection caused by Tranzschelia discolor. This fungus infects cherry trees as well as peach, plum, apricot, and almond trees. It can be damaging to trees because it causes the leaves to drop prematurely, which weakens the tree overall and may affect yield. However, this kind of damage generally happens late in the season, so the disease doesn’t have a major impact on the fruit produced.

Early signs, which appear in the spring, are cankers on twigs. These may appear as blisters or long splits on year-old twigs and bark. Eventually, the signs of rust on a cherry tree will show in the leaves.

If you see little to no damage to leaves on cherries with rust fungus until later in the season, your crop was likely not affected. However, you may want to apply a fungicide in the fall to bring the infection under control.

A lime and sulfur fungicide is typically used for cherry rust control. It should be applied all over the tree, once the fruit has been harvested, to both sides of the leaves, all branches and twigs, and the trunk.