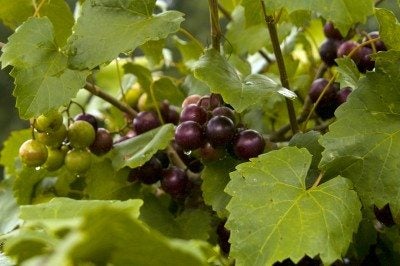 Muscadine grapes (Vitis rotundifolia) are indigenous to the Southeastern United States. Native Americans dried the fruit and introduced it to the early colonists. Muscadine grapevine plantings have been cultured for over 400 years for use in wine making, pies, and jellies. Let’s learn more about the growing requirements for muscadine grapes.

Muscadine grapevine planting should take place in an area of full sun with well-draining soil. For maximum grape production, the vine should be in full sun for most of the day; shaded areas reduce fruit set. Well-draining soil is of paramount importance. Vines may die if they are in standing water for even a short period of time, such as after a heavy rainstorm.

Muscadine grape care requires a soil pH of between 5.8 and 6.5. A soil test will help gauge any deficiencies. Dolomitic lime may be incorporated prior to muscadine grapevine planting to adjust the pH of the soil.

Plant muscadine grapes in the spring after all chance of freezing temperatures has passed. Plant the vine at the same depth or a little deeper than it was in its pot. For multiple vine planting, space the plants a minimum of 10 feet (3 m.) apart or better still, 20 feet (6 m.) apart in the row with 8 feet (2 m.) or more between rows. Water the plants in and mulch around the bases to aid in water retention.

Trellising and fertilizing are important aspects in the care of muscadine grapes.

The care of muscadine grapes requires trellising; they are after all, a vine. Any number of things can be used to for the growing muscadine grapes to clamber up. Decide what trellis system you wish to use and have it constructed and put in place prior to planting your vines. When considering your options, think about the long term. Have a trellis system that will take into account the permanent cordons, or arms, of the vine that need annual pruning. These cordons should have at least 4 feet (1 m.) of space from each other. A single wire (No. 9) 5 to 6 feet (1.5-2 m.) above the ground and anchored on both sides is a simple and easy trellis construct.

You can also create a double wire trellis, which will increase the grape yield. Attach 4 foot (1 m.) cross arms of 2 by 6 inch (5 x 15 cm.) treated lumber to treated posts to support double wires. Of course, muscadine grapes can be used as a shade provider over a pergola or arch as well.

Fertilization requirements for muscadine grapes are usually in the form of ¼ pound (113 g.) of 10-10-10 fertilizer applied around the vines after planting in late April to early May. Repeat this feeding every six weeks until early July. In the vine’s second year, apply ½ pound (227 g.) of fertilizer in early March, May, and July. Keep the fertilizer 21 inches (53 cm.) away from the trunk of the vine.

When feeding mature vines, broadcast 1 to 2 pounds (454-907 g.) of 10-10-10 around the vine in early to mid-March and an additional pound (454 g.) in June. Depending upon the average length of new vine growth, fertilizer amounts may need to be adjusted accordingly.

Keep the area surrounding the vines weed-free by shallow cultivation or mulch with bark to control weeds and aid in water retention. Water the vines regularly for the first two years and thereafter, the plants will likely be established enough to get adequate water from the soil, even during hot, dry periods.

For the most part, muscadine grapes are pest resistant. Japanese beetles do love a nibble, however, as do birds. Draping netting over the vines can thwart the birds. There are a number of disease resistant cultivars to choose from too, such as: