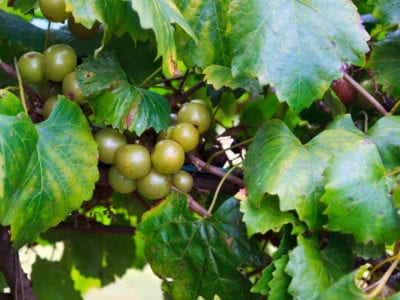 Muscadine grapes (Vitis rotundifolia) are native to southern North America and have been cultivated since colonial times. For owners of these wonderful fruits, knowing how to prune muscadine grapevines properly is a must. Without proper pruning, muscadines are doomed to become tangled masses of woody vines bearing little or no fruit.

Old wood must be cut away to make room for new growth, as it is new growth that produces fruit. Vines with too much old wood will not bloom and bear fruit. Those with too much growth will not produce well either. Therefore, pruning muscadine grapes not only controls growth, but also increases the productivity of the plant.

Before you can discuss how to prune muscadine grapevines, it’s important to understand the vine’s natural growth and the framework that should be imposed upon it.

The vine framework is comprised of the trunk and two or four permanent cordons (arms) and fruiting spurs. Pruning muscadine grapevines each dormant season maintains this basic form. New shoots — those grown in the current season — are the ones that bear fruit. These new shoots, however, rise from last season’s growth and a balance must be struck when pruning.

Grapevines, old or young, benefit from late winter or early spring pruning. The same process for pruning muscadine grapevines is used regardless of the type of trellis they are trained to. What’s important is to begin properly and avoid problems later on.

For new vines, pruning begins as soon as the root is planted and continues through the first two growing seasons. Cut the trunk stem back to two or four buds. Tie the trunk above or between the buds to the trellis wire. As the trunk grows, clip out the side shoots that develop, but leave the leaf growth along the trunk alone. Repeat the side shoot trimming throughout the summer.

Over the first and second growing season, keep pruning away at unwanted growth until the trunk is taller than the wire. Now is the time to prune the terminal (topmost) buds back to wire height and let the new topmost buds develop into the cordons. Trim back lateral (side) growth on the cordons to one foot (0.5 m.) lengths to encourage rapid growth and development.

From here on in, trimming muscadine vines will be a dormant season chore.

January through February is the ideal time for pruning these vines and the process is fairly simple. Once the basic framework is established, pruning is used to develop short lateral shoots, or spurs, off the cordons.

All shoot growth from the previous season should be cut back to spurs with two to four buds each. Over a number of years, as the spurs keep sending out new shoots, the vines develop spur clusters. When there are too many spur clusters or the clusters become too large, the shoots will become weak and the fruit sparse. When this occurs, pruning of muscadine vines should also include the partial removal of heavily spurred clusters or the compete removal of every other overloaded cluster. Often, these vigorous spurs are found at the top of the trunk and most of the spur system should be removed. Vines may “bleed” at the pruned sight, but this won’t hurt the plant and should be allowed to heal naturally.

Another growth to watch for while trimming muscadines is girdling. Tendrils will wind their way around the trunk or cordons and will eventually strangle the trunk or lib. Remove such growths yearly.

There is one more area that should be covered: how to prune muscadine grapevines that have been neglected and are seriously overgrown. You can start from scratch and cut the vine all the way back to the original trunk with drastic pruning. Muscadine grapevines are tough and most will survive the shock. However, to keep the vines producing while you bring the plant back under control, you might consider pruning only one side of the trunk or one cordon at a time. The process will take longer — possibly three or four seasons — but the vine will retain its strength and productivity.