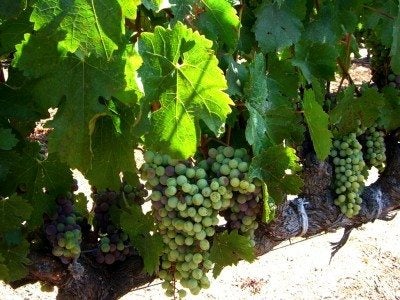 Nothing is as frustrating as growing grapes in the garden only to find they have succumbed to problems such as disease. One such disease of grapes most often seen in the South is Pierce’s disease. Keep reading to learn more about Pierce’s disease in grapes and what steps can be taken to prevent or treat this disease.

What is Pierce’s Disease?

Some grape species are prone to a disease known as Pierce’s disease. Pierce’s disease in grapes is the result of a type of bacteria known as Xylella fastidiosa. This bacterium is found in the xylem of the plant (the water-conducting tissues) and spreads from plant to plant by a particular sap insect known as a sharpshooter.

There are several signs occurring in mid to late summer that indicate the disease is present. As the bacteria in the xylem grows, it blocks the water-conducting system. The first thing that may be noticeable is that leaves turn slightly yellow or red on the margins.

After this, the fruit shrivels and dies, then the leaves fall off the plant. New canes develop irregularly. The disease spreads and even plants that you did not think were infected may show signs the next season.

One of the most common management practices involves spraying insecticide in areas close to the vineyard to reduce the number of sharpshooter insects.

Avoiding very susceptible grape varieties, such as Chardonnay and Pinot Noir, or young vines under three that are planted in an area known to have previous problems with infection helps as well.

Much agony over this disease can be spared if you plant varieties of disease-resistant grapes. Planting resistant varieties are the only 100 percent effective way to prevent or control Pierce’s disease.

There is little that can be done as far as Pierce’s disease treatment other than taking preventative measures. However, vines that have had symptoms for more than a year should be removed during the dormant season. Any vines that are showing foliar symptoms should also be removed. It is imperative that diseased vines be removed as soon as possible when symptoms are first apparent. This will help keep infection spread to a minimum.