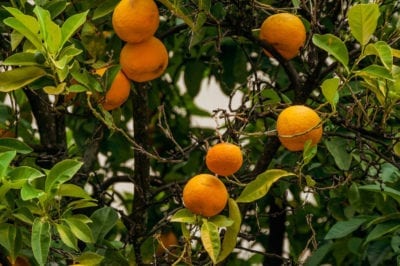 Why are My Orange Tree Leaves Turning Yellow?

Cultural practices, environmental conditions, disease, and pests may all be at the root of yellowing leaves on orange trees.

Yellowing leaves on orange trees are often the result of a disease, most often a fungal disease such as Phytophthora gummosis (foot rot), Phytophthora root rot (caused by the same fungus as gummosis), and Armillaria root rot (oak root fungus).

Several pests may be the culprit in orange trees with yellow leaves.

Yellowing leaves in oranges may also be caused by iron deficiency resulting from a high soil pH, high phosphorus, or low iron levels. This generally occurs in the spring when soil temps are cold and makes the leaves turn pale green to yellow. Apply foliar nitrogen, such as urea, to increase set and yield.

Prevention is the key to avoiding yellowing leaves on orange trees. Gardening practices such as proper irrigation will reduce the spread of diseases, along with the application of fungicide or pesticide and fertilization to buoy the tree’s defenses.

Unseasonable weather changes may also result in yellowing and leaf drop, so protect the tree by covering it or, if it is a container plant, move into a protected area. Additionally, remove any fallen fruit or that which is rotting on the limb to prevent attracting fungal or bacterial diseases. Prune out defoliated branches in the spring after the tree has completely leafed out.

Printer Friendly Version
Read more about Orange Trees
<PreviousNext>
Did you find this helpful? Share it with your friends!
FacebookTweetPinEmail
Related Articles
Newest Articles
You might also like…
Additional Help & Information