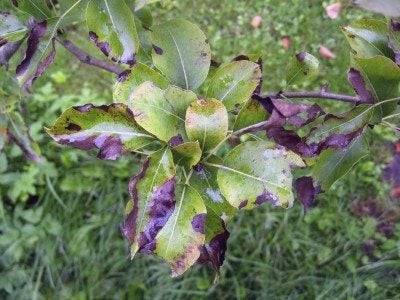 If you have an orchard with pear trees, expect to encounter pear tree diseases and pear tree insect problems. The two are related, since insects can spread or facilitate other pear tree issues. As a gardener, you can prevent many problems with pears by appropriate spraying and pruning. Read on for more information about fixing pear tree problems.

Several pear tree diseases can attack your trees. Since these tend to occur in a regular sequence, you can anticipate them and take protective action where possible.

The most devastating problems with pears come from a disease called fire blight, caused by the bacterium Erwinia amylovora. The bacteria can remain in the area over the winter in fallen fruit or new shoots. With the spring warmth, it multiplies rapidly and you’ll see a liquid oozing from tree tissues. Insects carry this ooze to blossoms and infect them in turn.

The key to controlling fire blight is sanitation. Fixing pear tree problems with fire blight requires that you remove all old fruit and fallen foliage from the orchard. Prune back wounded or cankered branches – at least 8 inches (20 cm.) below the problem area – and burn or dispose of them during winter. If you are just installing pear trees, look for cultivars with some resistance to this disease.

Other common diseases that damage pear trees include Fabraea leaf spot, caused by the fungus Fabraea maculate. Keep a look out for dark spots on leaves that then yellow and fall. Cankers appear on fruits too, and cause them to crack.

Again, sanitation is essential to controlling this disease. Removal and disposal of all fallen leaves significantly reduces the chance that your pears will get leaf spot. Fungicide spray can also help control the disease.

Pear scab, like apple scab, is caused by the fungus Venturia pirina. You’ll see circular, velvety dark spots on the tree’s leaves, fruit, and twigs. Over time, they turn gray and cracked. Since the fungus lasts out the winter on dead leaves, sanitation is again critical. Fungicide sprays are also effective.

If you see sooty smudges on the pear fruit, your tree may have another one of the most common pear tree diseases, sooty blotch, which is also common in apples. It is caused by the fungus Gloeodes pomigena. The blotches occur when the weather is wet or humid, but they can be washed off with soap and water. Good air circulation helps prevent this disease, so cut back grass and nearby shrubs.

The codling moth is one of the most serious pear tree insect problems. They lay eggs on the fruit, and the larvae bore into the fruit as they develop.

Another of the most common pear tree insect problems is called pear psylla. Again, these are insects that lay eggs on the pear trees. The hatching nymphs attack fruit and foliage, secreting a sweet liquid termed honeydew. Aphids and ants are attracted to the honeydew, so their presence is a sign that your tree may have the disease. Infected leaves can look burned and fall from the trees.