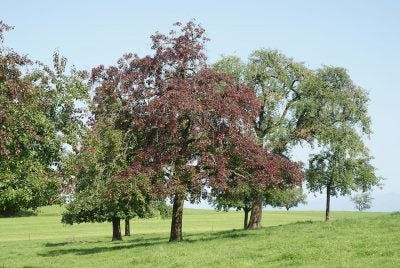 What is pear decline? As the name indicates, it is not a happy diagnosis. This disease causes susceptible pear tree species to decline in health and die. Since there is no effective pear decline treatment, your best bet is to purchase resistant plants in the first place. For information about symptoms of pear decline disease, read on.

What is Pear Decline Disease?

It is also possible for a pear tree to get pear decline phytoplasma if an infected tree section is grafted into it. The pathogen overwinters in the roots of infected trees to attack again in springtime.

Not every species of pear tree is equally susceptible to this disease. Since no effective pear decline treatment has been found as yet, you should plant species that resist the pear decline phytoplasma.

Select a cultivated pear tree that uses a rootstock from domestic Pyrus communis. Its chances of catching the pear decline phytoplasma are much less than for trees with Asian rootstocks like P. ussuriensis, P. serotina or P. pyricola.

Pear trees grafted on highly susceptible Asian rootstocks that are attacked by pear decline phytoplasma seem to collapse suddenly, as shoots die and leaves roll, turn red, and fall. Because of this, few commercially available pear varieties use Asian rootstocks.

If your pear is grafted to tolerant rootstocks, you’ll see a slow decline when the tree is stressed for water or nutrients. Trees on tolerant rootstocks may show moderate symptoms of pear decline disease when many psylla during the early growing season.

With proper care, including adequate water and nutrients, tolerant trees will continue to produce pears even after they carry the phytoplasma. Keeping down the population of psylla also reduces the symptoms on these trees.