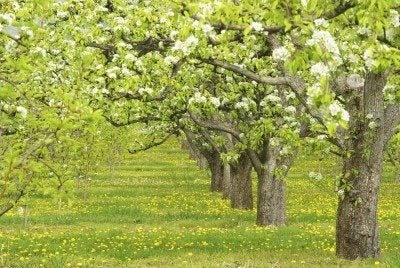 There just isn’t anything like a juicy, ripe pear. The sweet nectar running down your chin as you enjoy the tasty flavor and lush flesh simply can’t be beaten. With most fruit trees, you need another of their kind to pollinate in order to get this sweet fruit, and pear trees are no exception. While there are self-pollinating pear trees, you will get better yields with a partner plant. So which pear trees pollinate each other?

Growing your own pears is a rewarding endeavor that provides you with a ready supply of these tantalizing fruits but successful pollination is the necessary catalyst that produces the succulent pomes. There are several pear tree pollination guides available but there are also some simple rules that will help you choose the best trees with the greatest chance of producing.

Self-pollinating trees are those that do not strictly need another member of the family to set fruit. They are also called self-fruitful. Many pear varieties are considered self-fruitful, but the addition of another of their kind greatly increases the chances of pollination. This is because the pear flowers are short-lived and have minimal nectar. Their nectar is not particularly attractive to bees, which are necessary to carry the pollen from flower to flower.

Cross-pollination of pear trees results in better fruit yield and regular crops. In commercial production, bees are introduced to pear orchards in large numbers to increase the likelihood of successful pollination. Pear trees and pollination rely upon bees in even higher numbers than other fruits because they do not wind pollinate and the flower pollen count is low.

Which Pear Trees Pollinate Each Other?

Nearly all pear trees are suitable for pollinating species that bloom at the same time. Some pear trees can even produce parthenocarpic fruits, which have no seeds and grow without fertilization. Overall, your best crops will come from plants that have a partner or two.

The key to successful cross-pollination of pear trees is choosing varieties that bloom at the same time. Anjou, Kieffer, and Bartlett are self-pollinating but they will produce more fruit if paired with another of the same kind. You can intermix these varieties and still get a successful fruit set, as they all bloom around the same time.

One variety, Seckel, is not a good pollinator for Bartlett. Trees that flower later or earlier than the above choices will require a pollination partner from the same flowering group. Choosing two different cultivars as partners greatly increases the chances of pollination and, therefore, fruit set.

You can also simply rely upon your neighbor’s pear tree as a pollinator. As long as a partner pear tree is not further than 100 feet (30.5 m.) from your tree, you can still get plenty of fruit.

Since different cultivars increase pollination on trees, it is important to know some guidelines on choosing partner plants. Pick plants in the same pollination group for the best chance at big crops. For example, Louis Bonne will not pollinate William’s Bon Chretien because the former is in Group 2 and the latter in Group 3.

Most other pears available are in Group 3 except for Pitmaston Duchesse, Catillac, Onward, and Doyenne du Comice. Triploid cultivars will need two other pollinators. These are Catillac and Merton Pride. Choose two other trees in the same pollination group.

This is a simple guide and may seem confusing, but if all else fails, choose several plants that flower at the same time and your pear future should be secure. Pear trees and pollination doesn’t have to be difficult because so many varieties are self-fruitful. In the long run, having more than one tree enhances production and increases pollination chances.