Care Of Your Kaffir Lime Tree 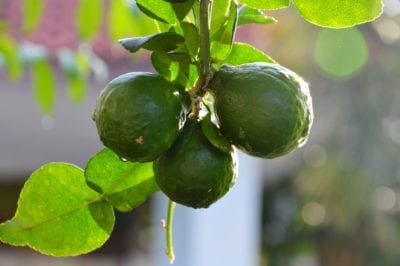 The Kaffir* lime tree (Citrus hystrix), also known as makrut lime, is commonly grown for use in Asian cuisine. While this dwarf citrus tree, reaching up to 5 feet (1.5 m.) tall, can be grown outdoors (year-round in USDA zones 9-10), it is best suited for indoors. The Kaffir lime tree thrives in potted environments and would benefit from placement out on the patio or deck, however, its container needs to provide adequate drainage.

The glossy, dark green leaves of the Kaffir lime tree are quite distinctive. Kaffir lime leaves look like two leaves joined together, as one appears to grow from the tip of the other. Kaffir lime leaves are most often used as an essential ingredient for flavoring many Asian dishes such as soups, curries, and fish.

They can be used fresh off the tree or from dried leaves. Kaffir lime leaves can also be frozen to retain their freshness. Picking the leaves every few weeks may help encourage growth. Crushing Kaffir lime leaves will release their fragrant oils, which emit an intense citrus aroma.

Kaffir limes are about the size of Western limes. They are dark green with a bumpy surface. In order for the Kaffir lime tree to produce any limes, be sure to provide plenty of light for flowering.

Since they produce very little juice, the juice and flesh of Kaffir limes is rarely used, but the sour-tasting rind can be finely grated and used for flavoring dishes. Fresh Kaffir limes can be frozen using freezer bags and used as needed.

Kaffir limes have many household uses as well, including cleaning and hair conditioning.

Kaffir lime trees are generally not bothered by many pest problems but may become susceptible to mites or scale if left near infected plants.

Although it is possible to grow Kaffir lime trees from seed, this method is often difficult to achieve. Likewise, grafted trees tend to bloom and bear fruit earlier than seedlings.

Despite the fact that Kaffir lime trees are tolerant of less than ideal conditions, there are specific needs that should be met for optimal growth.

Kaffir limes prefer full sun in moist, well-drained soil. If grown indoors, keep near a sunny window. The Kaffir lime tree appreciates water and somewhat humid conditions during the growing season. Keep in mind, however, that this tree is prone to root rot if kept too wet, so allow the soil to dry out some between waterings. Regular misting helps with humidity levels.

Kaffir lime trees are cold sensitive and need to be protected from frost. Therefore, these plants should be brought indoors during winter if they are grown outside. They enjoy indoor temperatures around 60 degrees F. (16 C.) or above, especially during winter months.

Prune the lime tree while young to encourage branching and a more bushy plant.

*NOTE: The word “kafir” was originally used to refer to non-Muslims, but was later adopted by white colonialists to describe people of color or slaves. It is because of this, “Kaffir” is deemed in some regions as a derogatory and insulting term. It is important to note, however, that its reference in this article is NOT intended to offend anyone but is simply referencing the Kaffir lime tree for which it is commonly known in North America.

Printer Friendly Version
Read more about Lime Trees
<PreviousNext>
Did you find this helpful? Share it with your friends!
FacebookTweetPinEmail
Related Articles
Newest Articles
You might also like…
Additional Help & Information