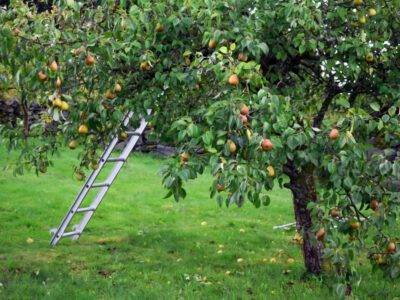 Diseases that hit plants under the soil are particularly annoying because they can be hard to spot. Armillaria rot or pear oak root fungus is just such a sneaky subject. Armillaria rot on pear is a fungus that attacks the roots system of the tree. The fungus will travel up the tree into the stems and branches. There are few external signs of the disease and those few mimic several other root diseases. We’ll tell you how to prevent pear armillaria rot so you can avoid this deadly disease in your pear trees.

If a healthy tree suddenly gets limp and lacks vigor, it may be pear armillaria root and crown rot. Pears with armillaria root rot are not going to get better and the disease can be spread quickly in orchard situations. To avoid loss of the tree, site selection, plant resistance and careful sanitation practices may help.

The fungus lives in the roots of trees and thrives when soil is cool and moist. Pears with armillaria rot will start to decline over several years. The tree produces small, discolored leaves which drop off. Eventually, twigs and then branches die.

If you were to unearth the roots of the tree and scrape away the bark, a white mycelium will reveal itself. There may also be honey colored mushrooms at the base of the trunk in late winter to early fall. Infected tissue will have a strong mushroom odor.

Pear armillaria crown and root rot survives in dead roots left in soil. It can survive for decades. Where plants are installed in areas that once hosted oak, black walnut or willow trees, the incidences of infection increase. Infected orchards are often found where irrigation is from streams or rivers that were once lined with oak trees.

The fungus can also be spread with farm machinery that is contaminated with the fungus or from flood water. In high density orchards, the disease can spread from tree to tree. Often, the plants at the center of the orchard exhibit the first signs, with disease progression moving outward.

How to Prevent Pear Armillaria Rot

There are not effective treatments for armillaria rot on pear. Trees need to be removed to prevent the spread of the fungus. Care should be taken to get out all the root material.

Some good results have been obtained by exposing the crown and upper root area of an infected tree. Dig soil away in spring and leave the area exposed through the growing season. Keep the area clean of plant debris and keep the area as dry as possible.

Prior to planting new trees, fumigate the soil. Any infected plant material should be burned to prevent accidental spread of the fungus to host plants. Selecting a site with excellent drainage, where no host plants were grown and using a resistant pear strain are the most effective means of avoiding pear armillaria crown and root rot.