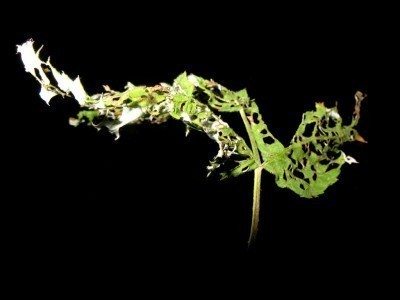 Raspberry patches give home gardeners easy access to the tasty fruit these canes produce, making berry-picking a fun experience for the whole family. Like other berries though, raspberry fruits are frequently invaded by worms that can ruin a harvest. These raspberry worms are the larvae of a tiny beetle, known as the raspberry beetle (Byturus unicolor).

The raspberry fruitworm beetle reaches up to about 1/5 inch (5 mm.) long, its reddish brown body is covered in tiny, short hairs. Adults feed voraciously on leaves of raspberry canes, favoring the newest canes and leaves, but may spread further when populations are high. Mating takes place on or near raspberry flowers, where eggs are deposited.

Adult raspberry fruitworm beetles appear from mid April to mid May, eating the surface tissues from raspberry leaves or skeletonizing them entirely. They may feed on opening flower buds when they appear, if numbers are large– even whole bud clusters are sometimes consumed. However, the damage from the adult beetle is usually insignificant to the plant as a whole.

Raspberry worms, on the other hand, can cause serious economic damage. When these tiny worms hatch they find themselves inside or up against individual fruit caps. The larvae burrow into the raspberry receptacles, sometimes causing fruits to dry up or drop prematurely. Infestation ultimately results in the downgrading of commercial harvests when raspberry worms are found among the fruit.

If you pay close attention to your raspberries throughout the spring, you may be able to catch the tiny raspberry fruitworm beetles shortly after emergence, but before they’ve begun to lay eggs. Handpicking is possible, even though these pests are small, if you are determined. Dropping them into a bucket of soapy water will kill them quickly.

Killing raspberry fruitworms naturally is a goal of most gardeners, who prefer not to add pesticides to home-grown fruits. Spinosad is a microbial pesticide allowed in organic gardens and considered totally harmless to humans, but you must restrict the use of this chemical to evenings since it is dangerous to bees while wet. Spray raspberry canes with active beetle populations as soon as they are noticed or wait until flower buds swell to target raspberry worms specifically. A second application after bloom may be required to kill all the worms.

After harvest, raking, or shallowly cultivating the soil around your raspberry canes can break up pupating larvae in the soil. If you keep chickens, this is a great time to let them in the garden to help destroy the tasty beetles.