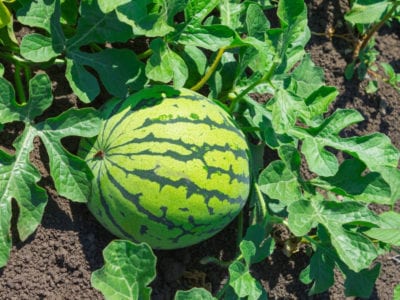 Watermelon root rot is a fungal disease caused by the pathogen Monosporascus cannonballus. Also known as watermelon vine decline, it can cause massive crop loss in affected watermelon plants. Learn more about the devastating disease in this article.

This disease is prevalent in hot climates and has been known to cause massive crop loss in the United States in Texas, Arizona, and California. Watermelon cannonballus disease is also a problem in Mexico, Guatemala, Honduras, Brazil, Spain, Italy, Israel, Iran, Libya, Tunisia, Saudi Arabia, Pakistan, India, Japan, and Taiwan. Watermelon vine decline is generally a problem in sites with clay or silt soil.

The symptoms of monosporascus root and vine rot of watermelon often go unnoticed until a few weeks before harvest. Early symptoms are stunted plants and yellowing of the plant’s old crown leaves. The yellowing and dropping of foliage will quickly move along the vine. Within five to ten days of the first yellow leaves, an infected plant may be completely defoliated.

Fruits may suffer from sunburn without the protective foliage. Brown soggy streaking or lesions may be visible at the base of infected plants. Fruits on infected plants may also be stunted or drop prematurely. When dug up, infected plants will have small, brown, rotted roots.

Watermelon cannonballus disease is soil borne. The fungus can build up in the soil year after year in sites where cucurbits are regularly planted. Three to four year crop rotation on cucurbits can help control the disease.

Soil fumigation is also an effective control method. Fungicides delivered by deep irrigation in early spring may also help. However, fungicides will not help already infected plants. Usually, gardeners are still able to harvest some fruit from infected plants, but then plants should be dug up and destroyed to prevent more spread.

Many new disease resistant varieties of watermelon are now available.