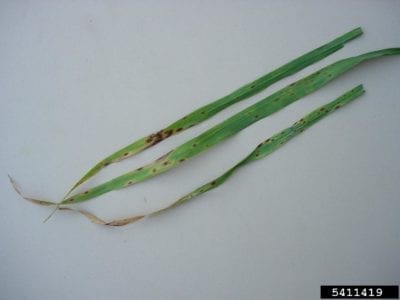 Fungal diseases in grain crops are all too common, and barley is no exception. Barley spot blotch disease can affect any part of the plant at any time. Seedlings are most commonly infected but, if they escape, the disease may show up in developing shoots. The disease can reduce yield and kill young plants. There are several steps to preventing and treating barley spot blotch.

Barley spot blotch disease is found in many wild and cultivated grasses. Spot blotch of barley is caused by the fungus Bipolaris sorokiniana. The fungus is known to reduce yields by one to three percent. When barley kernels are produced, they often have black point, a discoloring on the tips of the kernels.

In seedlings, look at the soil line for chocolate brown streaks. The infection progresses to turn shoots yellow, and they may die. If they survive, the shoots and roots are weak and deformed, and seed heads may not completely emerge.

Mature plants can develop oblong dark brown lesions. Where many lesions are present, the leaves dry out and may die. Kernels on barley with spot blotch are shriveled and underweight. Presence of the disease diminishes yield and weight of grain.

Once barley spot blotch symptoms are evident, the field is already infected. The fungus overwinters in wild or cultivated grasses and grains. The disease moves quickly when temperatures are between 60 and 80 degrees F. (16-27 C.) and conditions are wet and windy. Spores will travel on wind and rain splash.

Timed fungicide applications can reduce the damage and incidence of the disease. There are also cultural steps to take to prevent the occurrence of the fungus. Barley with spot blotch should be treated with registered fungicides at the first sign of the disease. Studies show that four applications of fungicide during the season will help control spot blotch and reduce grain loss.

Watch seedlings carefully. Prevention is possible with certified treated, disease free seed. Do not save seed from fields that have shown signs of the disease. Rotate barley with non-host plants such as oats, rye, and broadleaf grasses. Cleanup discarded plant material. The 6-rowed barley varieties have greater resistance than 2-row cultivars.