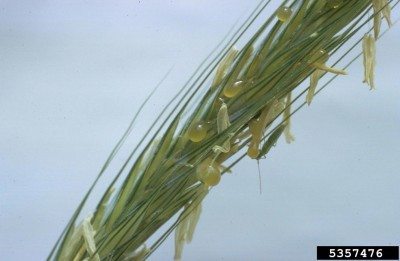 Growing grains and hay can be an interesting way to make a living or enhance your garden experience, but with great grains come great responsibilities. Ergot fungus is a serious pathogen that can infect your rye, wheat, and other grasses or grains– learn how to identify this problem early in its lifecycle.

What is Ergot Fungus?

Ergot is a fungus that has lived side by side with mankind for hundreds of years. In fact, the first documented case of ergotism occurred in 857 A.D. in the Rhine Valley in Europe. Ergot fungus history is long and complicated. At one time, ergot fungus disease was a very serious problem among populations who lived off of grain products, especially rye. Today, we’ve tamed ergot commercially, but you may still encounter this fungal pathogen if you raise livestock or have decided to try your hand at a small stand of grain.

Although commonly known as ergot grain fungus, the disease is actually caused by the fungus in the genus Claviceps. It’s a very common problem for livestock owners and farmers alike, especially when springs are cool and wet. Early ergot fungus symptoms in grains and grasses are very hard to detect, but if you look at their flowering heads closely, you may notice an unusual shimmering or sheen caused by a sticky substance coming from infected flowers.

This honeydew contains a huge number of spores ready to spread. Often, insects inadvertently harvest and carry them from plant to plant as they travel through their day, but sometimes violent rain storms can splash the spores between closely spaced plants. Once the spores have taken hold, they replace viable grain kernels with elongated, purple to black sclerotia bodies that will protect new spores until the next season.

Where is Ergot Fungus Found?

Since ergot fungus has possibly been with us since the invention of agriculture, it’s hard to believe there’s any corner of the world untouched by this pathogen. That’s why it’s so important to know how to identify ergot when you’re growing any sort of grain or grass to maturity. The consumption of grasses or grains infected with ergot has serious consequences for man and beast alike.

In humans, ergot consumption can lead to a myriad of symptoms, from gangrene to hyperthermia, convulsions, and mental illness. It is because of the sensation of burning and the black gangrenous extremities in early victims, ergotism was once known as St. Anthony’s Fire or just Holy Fire. Historically, death was frequently the end game of this fungal pathogen, since the mycotoxins released by the fungus often destroyed human immunity against other diseases.

Animals suffer many of the same symptoms as humans, including the gangrene, hyperthermia, and convulsions; but when an animal has managed to partially adapt to ergot-infected feed, it can also interfere with normal reproduction. Grazing animals, particularly horses, may suffer from prolonged gestations, a lack of milk production, and the early death of their offspring. The only treatment for ergotism in any population is to stop feeding it immediately and offer supportive therapy for symptoms.

Printer Friendly Version
Read more about General Grains
Next>
Did you find this helpful? Share it with your friends!
FacebookTweetPinEmail
Related Articles
Newest Articles
You might also like…
Additional Help & Information