What Is Culantro Used For: Learn How To Grow Culantro Herbs 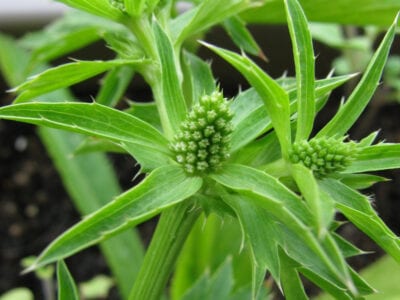 I love to cook, and I like to mix it up and cook food from other countries. In my search for a new idea, I was looking through a book on Puerto Rican food and found some references to culantro herbs. At first I thought they meant ‘cilantro,’ and the cookbook author had a terrible editor, but no, it really was culantro herb. This got me curious because I had never heard of it. Now that I obviously know what culantro is used for, how do you grow culantro and what other culantro plant care is needed? Let’s find out.

What is Culantro Used For?

Culantro (Eryngium foetidum) is a biennial herb common throughout the Caribbean and Central America. We don’t see it much in the United States unless, of course, you are eating cuisine from one of these areas. It is sometimes called Puerto Rican coriander, Black Benny, saw leaf herb, Mexican coriander, spiny coriander, fitweed, and spiritweed. In Puerto Rico where it is a staple, it is called recao.

The name ‘culantro’ looks like ‘cilantro’ and it belongs in the same plant family – as it happens, it smells like cilantro and can be used in place of cilantro, albeit with a somewhat stronger flavor.

It is found growing wild in moist areas. The plant is small with lance shaped, dark green, 4 to 8 inch (10-20 cm.) long leaves forming a rosette. The plant is used in salsas, softrito, chutneys, ceviche, sauces, rice, stews and soups.

How to Grow Culantro

Culantro is slow to start from seed but, once established, will yield fresh leaves until the first frost. Since the seed is so tiny, it should be started inside. Use bottom heat to facilitate germination.

Plant after the last frost in the spring. Transplant seedlings either into pots or directly into the ground in an area with as much shade as possible and keep them consistently moist.

Plants can be harvested about 10 weeks after seeding. Culantro is similar to lettuce in that it thrives in the spring but, like lettuce, bolts with the hot temps of summer.

In the wild, culantro growing conditions for thriving plants are shaded and wet. Even when the culantro plants are kept in shade, they tend to flower, a leafless stalk with spiky light green blossoms. Pinch the stalk or cut it off to encourage additional foliage growth. Mimic the natural growing conditions as much as possible, keeping the plant in the shade and consistently moist.

Culantro plant care is nominal, as it is relatively pest and disease free. It is said to attract beneficial insects as well as defend against aphids.