Parsley Has Yellow Spots On Leaves: Why Does Parsley Turn Yellow? 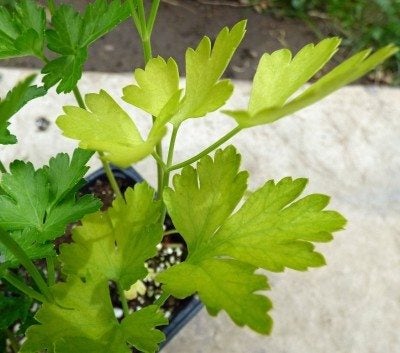 Parsley is one of the most popular and commonly grown herbs with a variety of culinary uses and an ability to thrive in either cool or warm climes. Simply provide the parsley plants with well-drained soil and plenty of irrigation for healthy herbs. What’s going on when the parsley has yellow spots on leaves though? Keep reading for answers to why parsley plants turn yellow.

Why Does Parsley Turn Yellow?

If your parsley plant suddenly looks peaked, you may be searching for the answer to the question, “Why does parsley turn yellow?” Parsley leaves yellowing may be the result of a number of factors. Let’s take a look at some of the most common:

Leaf spot fungus– A fungal infection called leaf spot may quite possibly be the culprit, resulting in parsley leaves yellowing. Both sides of the leaves are afflicted with yellow specks, which gradually turn dark brown with tiny black pin spots in the center and a yellow outer border. Leaves weaken and wilt and will eventually drop off altogether.

Use a fungicide to control the infection, or if severely afflicted, the entire plant may need to be dug up and discarded.

Blight– Another reason your parsley plant has yellow spots on leaves may be from blight, with onset symptoms that include brownish patches on the foliage. As this infection progresses, typically the blotching overtakes the leaves, causing the plant to die.

Caused by high humidity conditions, the remedy obviously is to avoid watering the foliage and water at the base of the plant only to reduce humidity levels. Also water in the morning so the plant can dry, and thin the plant to encourage air circulation.

Crown or root rot– Yet another possibility for your parsley plant going yellow may be crown rot and root rot. Crown and root rot affect the entire plant, eventually resulting in its demise and is caused by bacteria and fungi in the soil media. Soggy or mushy roots, red blotches on the taproot, reddish discoloration at the root, browning of the roots and stems, sickly leaves, and water rings at the stem are all signs of crown and root rot.

Again, keep the plant in sunlight and water in the morning so the soil can dry out. Crop rotation may help with the eradication of crown and root rot. Also, this fungus occurs in late winter thaws when dead leaves decompose, harboring bacteria and fungi which are then spread to healthy plants. Treat parsley as an annual and pull in the fall of their first growing season.

Stemphylium fungus– Stemphylium vesicarium, a fungus more often found in crops such as garlic, leek, onion, asparagus, and alfalfa, has recently been found to afflict parsley herbs with the result of growing parsley turning yellow and dying off. To minimize issues with this disease, space parsley plants apart and water in the morning.

Septoria leaf spot– Septoria leaf spot on tomatoes is also a very common cause of yellowing or yellow to tan to brown lesions with yellow border on parsley leaves. A general garden fungicide should be applied, or if the infection is rampant, remove the plant entirely. A disease-resistant variety of parsley should be planted, such as ‘Paramount.’

Spider mites– Finally, spider mites are another culprit that causes the yellowing of parsley foliage. To get rid of spider mites, an insecticide may be applied or predator ants or predator mites may be introduced. To attract the ants, sprinkle some sugar around the base of the plant. Predator mites will need to be purchased at a garden center or nursery. Additionally, the application of neem oil and insecticidal soaps will greatly reduce the spider mite population. Be sure to cover the underside of the leaves.

Printer Friendly Version
Read more about Parsley
<PreviousNext>
Did you find this helpful? Share it with your friends!
FacebookTweetPinEmail
Related Articles
Newest Articles
You might also like…
Additional Help & Information