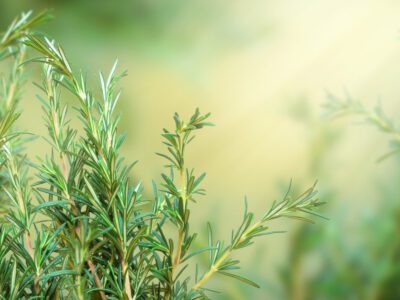 A lot of people enjoy having small kitchen window sill plants like rosemary. However, although they are easy to grow, they aren’t without faults. Often you’ll find there are problems with growing rosemary, one of them being a common fungus.

Perhaps you’ve noticed a white powder on your rosemary plants in your kitchen. If so, you aren’t alone. The white powder is actually powdery mildew on rosemary, a common plant ailment. It is caused by many different fungi that are closely related.

This is one of the most common problems with growing rosemary plants, and all indoor plants actually. Each indoor plant has a white powdery mildew that is specific to that particular plant. Rosemary is no different.

Powdery mildew won’t kill the rosemary plant, but it will weaken it. This is one of the easiest plant diseases to diagnose. Powdery mildew appears as a white powder which coats the leaves of the plant. The powder is actually thousands of little spores and can spread to other plants if severe enough.

How to Get Rid of Powdery Mildew on Rosemary

Powdery mildew can definitely make the plant look a little ragged, but it shouldn’t kill it. Pick up any infected leaves that have fallen off the plant. Also, take infected plants out of high humidity rooms, like the bathroom or kitchen. Rosemary prefers drier conditions.

Finally, spraying the rosemary with a fungicide, such as neem oil, will help to kill the fungus. You might want to try spraying water on it first every few days to knock the mildew off before resorting to fungicide.

You may need to repeat this every few days for it to be effective, but be careful not to overwater the plant itself or you will end up with root rot, another of the common problems for rosemary plants or other indoor houseplants.

One of the best ways to treat powdery mildew is to prevent it in the first place. Even if you still have an outbreak, with a few precautions beforehand, the fungus will not have as good a stronghold, making its treatment even easier.

Now that you know what the white powder on rosemary is and how to treat or prevent it, you can go back to enjoying your rosemary plant indoors or in the garden.