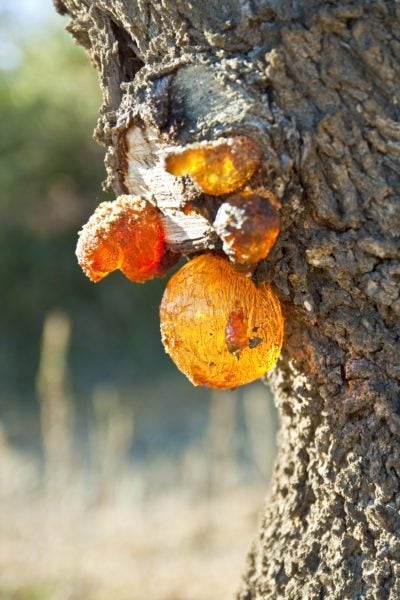 Almonds are not only beautiful deciduous trees, but also nutritious and delicious, leading many gardeners to grow their own. Even with the best care, however, almonds are susceptible to their share of almond tree diseases. When treating sick almond trees, it’s important to recognize almond disease symptoms in order to identify which of the diseases of almond are afflicting the tree. Read on to learn how to treat and prevent almond diseases.

Most of the diseases that afflict almonds are fungal diseases, such as Botryosphaeria canker and Ceratocystis canker.

Botryosphaeria canker – Botryosphaeria canker, or band canker, is a fungal disease that used to be fairly uncommon. Today, it hits commercial growers especially hard, showing its almond disease symptoms in natural openings on the tree and in pruning wounds on scaffold branches. These are most frequently seen after a rainfall when spores are spread not only on the wind, but through rain splash. Additionally, some varieties of almond are more susceptible to this disease, like that of Padre.

It is also seen in overfertilized young trees. If the tree does get band canker, unfortunately, the entire tree needs to be destroyed. The best method of attack is to prevent the tree from getting this Botryosphaeria canker. This means not pruning when rain is imminent and when almond pruning is necessary, do so with great care to avoid injuring the tree.

Ceratocystis canker – Ceratocystis canker is more likely to afflict commercial almond growers. It is also called “shaker’s disease” because it is often introduced into injuries caused by a harvest shaker. This fungal disease is transmitted via fruit flies and beetles that are attracted to the tree’s wound. It is the most common disease of the scaffold and trunk and significantly reduces the fruit yield by causing scaffold loss.

Hull rot is a big problem with the commercial industries star almond variety, the Nonpareil. Another fungal disease that is spread on the wind, hull rot most often afflicts tree that are overwatered and/or overfertilized. For commercial growers, the disease is most often the result of improper harvest or shaking too soon after rain or irrigating.

Shot hole disease appears as small, dark lesions on the leaves and infects the almond late in the growing season. Nuts may also be afflicted with lesions and although they are unsightly, they will not affect the flavor. As the spots grow, the centers rot out, creating a hole that looks like a target peppered with buckshot. Prevent shot hole disease by watering with a drip hose at the base of the tree. If the tree becomes infected, remove affected foliage with sterile pruning shear. Dispose of infected material in a sealed garbage bag.

Brown rot blossom and twig blight are both caused by the fungus, Monolina fructicola. In this case, the first almond disease symptoms are that the blooms wither and drop. This is followed by twig death. Over time, this disease not only weakens the tree, but also decreases the crop yield. If the tree is infected, remove all infected parts of the almond with sterile pruning shears. Also, remove any debris from beneath the tree, as this fungus overwinters in such detritus.

Anthracnose is another fungal infection that spreads during rainy periods of the early, cool spring. It kills both blossoms and developing nuts. Anthracnose can also cause whole branches to defoliate and die. Again, remove any infected foliage and debris from beneath the tree using sanitary practices. Dispose of the above in a sealed garbage bag. Water the tree with a drip hose at the base of the tree.

How to Prevent Almond Disease

Treating sick almond trees is sometimes not an option; sometimes it’s too late. The best offense, as they say, is a good defense.