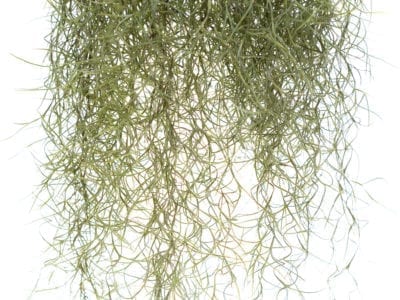 Spanish moss is a rootless plant with stringy, whisker-like growth that often droops from tree limbs. It is abundant along the southwest coastal area of the United States, extending from southern Virginia to eastern Texas. Is Spanish moss bad for pecans? Spanish moss isn’t a parasite because it takes nutrients from the air and debris that collects on the tree, not from the tree itself. It uses the tree only for support. However, Spanish moss on pecans can cause serious trouble when it grows so thick that it inhibits growth of the nuts.

Additionally, a pecan tree with Spanish moss may suffer broken branches if the weight of the moss is great, especially when the moss is wet and heavy after a rainfall. A thick growth of Spanish moss can also prevent sun from reaching the leaves. Read on and learn what you can do about pecans and Spanish moss.

Currently, there are no chemical herbicides labeled for controlling Spanish moss on pecans in the United States, although some growers report success by spraying copper sulfate, potassium, or a mixture of baking soda and water.

Any spray should be used with great care to avoid harming pecan trees or surrounding plants. Your local cooperative extension office is a good source of information.

Most growers find that simple manual removal is the best means of pecan Spanish moss control. One of the easiest ways to remove Spanish moss on pecans is to use a long-handled rake or a long pole with a hook at the end.

However, this can be quite a chore if you have a large number of pecan trees, or if taller trees are out of reach. In this case, it’s a good idea to hire an arborist or a tree company with a bucket truck. With the proper equipment, removing Spanish moss on pecans is a simple task.

Printer Friendly Version
Read more about Pecan
<PreviousNext>
Did you find this helpful? Share it with your friends!
FacebookTweetPinEmail
Related Articles
Newest Articles
You might also like…
Additional Help & Information