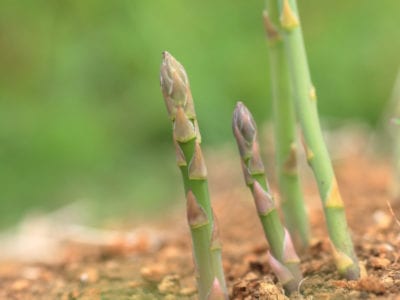 Asparagus crown and root rot is one of the most economically disastrous diseases of the crop worldwide. Asparagus crown rot is caused by three species of Fusarium: Fusarium oxysporum f. sp. asparagi, Fusarium proliferatum, and Fusarium moniliforme. All three fungi can invade the roots, but F. oxysporum f. sp. asparagi also invade the xylem tissue, the woody supportive tissue that carries water and nutrients from the roots to the stem and leaves. Learn more about controlling asparagus fusarium crown rot and root rot here.

The stems and cortex are dotted with reddish brown lesions and when cut open, reveal vascular discoloration. The feeder roots will almost completely rot and have the same reddish brown coloring. The rotting, dying asparagus plants infect each other and the disease can spread exponentially.

Crown rot of asparagus can survive in soil indefinitely and spreads through movement of infected soil, air currents, and seed contamination. Plant stresses and environmental factors such as poor cultural practices or drainage further open plants up to infection. Positive identification of crown rot is determined through laboratory testing.

Fusarium disease is extremely difficult, if not impossible, to manage once it’s in the field. As the saying goes, “the best offense is a good defense,” so monitor for pests and disease and keep the area around the asparagus crop free of weeds and other plant detritus.

Also, plant disease free seedlings, transplants, or crowns, minimize plant stress, avoid lengthy harvest periods, and be consistent with irrigation and fertilization to lessen the chances that Fusarium will infect the crop.