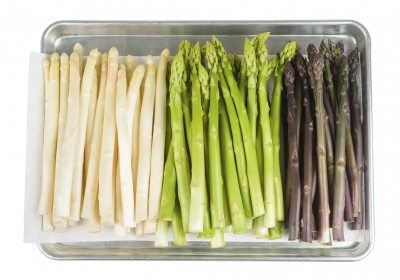 Establishing a healthy bed of asparagus requires considerable work but, once established, you’ll enjoy asparagus in early spring for a very long time. Asparagus is a long-lived perennial vegetable – so long-lived, in fact, that some types of asparagus survive for 20 to 30 years. Read on to learn more about different asparagus varieties, including a few heirloom asparagus types.

Asparagus is either male or female. Most gardeners primarily plant male plants, which produce larger spears in greater numbers. This is because female plants expend tremendous energy producing seeds and small, weedy seedlings that compete with established asparagus plants.

Until the last two decades, types of asparagus consisted of a mix of male and female plants. However, researchers have discovered ways to effectively propagate all-male varieties of asparagus. Look for all-male plants for plenty of big, flavorful spears.

‘Jersey’ Series – This all-male series of hybrid asparagus varieties include ‘Jersey Giant,’ a hardy plant that performs well in chilly climates. ‘Jersey Knight’ is one of the more vigorous types of asparagus; highly resistant to asparagus diseases such as crown rot, rust, and fusarium wilt. ‘Jersey Supreme’ is a newer, disease-resistant variety that produces spears earlier than ‘Giant’ or ‘Knight.’ ‘Supreme’ is an excellent choice for light, sandy soil.

‘Apollo’ – This asparagus type performs well in both chilly and warm weather conditions. It is highly disease-resistant.

‘UC 157’ – This is a hybrid asparagus that performs well in warmer climates. This pale green, disease-resistant asparagus is both male and female.

‘Atlas’ – Atlas is a vigorous variety that performs well in hot weather. This asparagus type is resistant to most asparagus diseases, including fusarium rust.

‘Viking KBC’ – This is a newer hybrid variety in a mix of male and female plants. ‘Viking’ is known to produce large yields.

‘Mary Washington’ is a traditional variety that produces long, deep green spears with pale purple tips. Appreciated for its uniform size and delicious flavor, ‘Mary Washington’ has been a favorite of American gardeners for more than a century.

‘Precoce D’Argenteuil’ asparagus is an heirloom variety that is popular in Europe for its sweet stalks, each topped with an attractive, rosy pink tip.