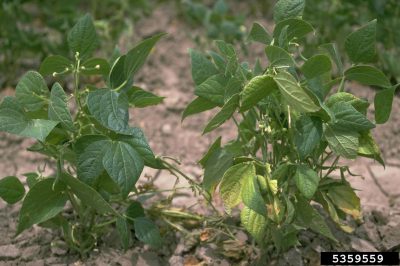 As if the gardener doesn’t have enough to contend with above the ground, root rots can be serious and often undiagnosed diseases of plants. While you combat the usual visible insect damage and diseases, this insidious soil dwelling fungus is quietly destroying your bean roots. Common fungus on bean plants can be discerned with the naked eye, but to see the damage associated with root rot, you need to dig up the plant. Fortunately, such fungal diseases of beans can be combated successfully with a little preparation and know how.

What Causes Fungus on Bean Plants?

Root rot in bean plants is produced by several different soil dwelling fungi. It might stem from a Fusarium, Rhizoctonia, or Pythium species, but that doesn’t really matter. What matters is the effect it has on your crop. Harvest yields are diminished, plant vigor is compromised, and, in some cases, the entire plant may die. Bean root rot control starts before planting with careful cultural considerations.

As mentioned, most bean root diseases are caused by any one of three different fungi. These fungi persist in soil, often for several years. They live on decomposing vegetation left from previous season’s plants. The fungi are most dangerous in mid to late season production of susceptible crops.

When plants are unstressed, the disease does very little damage beyond some vigor loss. However, in areas that have experienced extreme heat, drought, poor soil, diminished nutrition, or oxygen deprivation due to compaction, the disease takes hold on those traumatized plants.

Other plants that are susceptible and actually support the formation of colonies of the fungus that causes bean root diseases are potatoes, sugar beets, soybeans, and sunflowers.

The most common signs of root rot are subtle and hard to discern at first. Bean plants may be stunted and turn yellow, exhibiting signs of malnourishment. Symptoms of root rot in bean plants can start at emergence or even in mature plants. The dry bean varieties are more commonly affected than snap beans.

If you pull up a plant, most of the fungi will cause water-soaked lesions on roots. The color of the roots will be brick red. Scraping a root will reveal a dark interior. In many cases, the side roots rot away, and the tap roots become hollow and dry. If there is sufficient moisture, lateral roots may form off of the taproot, but these will be spindly and mostly ineffectual.

Fungal diseases of beans are actually very simple to prevent. The most important control is crop rotation. Since the fungi persist in soil for years, they will attack the crop annually if it is planted in the same area. Without food, overtime the fungus will die. Avoid planting any of the other host plants listed above as well.

Clean up infected plant matter and destroy it rather than chopping it into the soil to compost. Do not feed the spent plants to animals, as the fungus will be borne in their manure and can spread if used in the crop area.

Plant items like corn and small grains for the next three years. Recovery of diseased plants by formation of lateral root shoots can be accomplished by providing adequate water, nutrition, and ventilation.