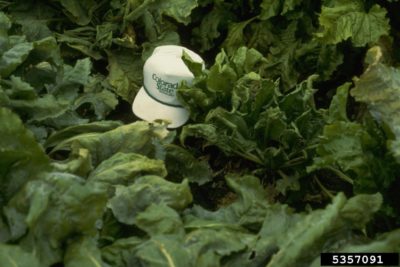 Leaves on beets that are dwarfed, crinkled, and rolled are a sign of beet curly top disease. Certainly, the presence of curly top symptoms are slightly ominous, and it can kill the beets, but the real threat is that curly top virus on beets can be easily spread to other crops. To minimize the risk of other crops contracting the disease, read on to learn how to recognize the signs of curly top of beet plants and how to treat curly top in beets.

As mentioned, the leaves of the beet plants are stunted and rolled upward when beet curly top disease is present. Also, the veins on the underside of infected leaves become irregularly swollen with bumps.

Not only do the leaves of the beet plants become distorted, but the virus affects young roots as well. They become stunted and distorted and often die. The death of these rootlets leads to production of new rootlets developing into a “hairy root” symptom that mimics the symptoms of rhizomania.

The disease is vectored by the beet leafhopper (Circulifer tenellus). This pest can travel long distances, reproduces rapaciously, and has an enormous host range of over 300 species in 44 plant families, including tomatoes, beans, and peppers.

Leafhoppers overwinter on a variety of annual and perennial weeds and acquire the disease after feeding on infected plants. They can then transmit the virus for the rest of their lives. The disease can be found all over the western United States and is also present in the semi-arid regions of Europe, Africa, and Asia.

The severity of the infection depends on the prevalence of weeds, hosts of the virus, as well as the reproductive capacity and migration of the leafhopper.

How to Treat Curly Top in Beets

The best way to tackle curly top in beets is to prevent it. Plant-resistant cultivars that are adapted to your area. Also, keep the garden and surrounding area free from weeds that can harbor overwintering populations of leafhoppers.

In addition, if possible, plant in a slightly shaded area of the garden since leafhoppers prefer to feed in sunny areas. If it can’t be helped and the garden is in full sun, place a netted cage over the plants when they are young. The netting will provide a bit of shade and may retard the leafhoppers entry. Be sure the netting isn’t touching the plants. Remove the cage when the plants are mature as they are less likely to become infected.

If you do identify a diseased plant, remove it from the garden immediately.