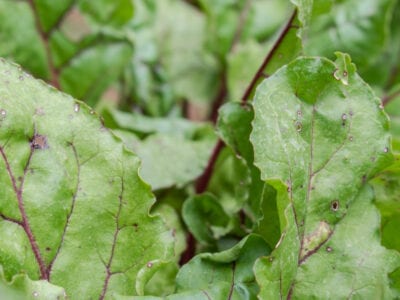 Cruciferous plant diseases are those that attack members of the Brassicaceae family such as broccoli, cauliflower, kale, and cabbage. White spot fungus is one such disease that favors the loose leaves of these vegetables and is therefore more of a threat to spinach, kale, and turnips than the tight head of cabbage or the flower heads of cauliflower and broccoli.

This fungus is caused by a species of Cercospora and has become more common in recent years. White spot on leafy vegetables is one of several cruciferous fungal problems. It also goes by the name frogeye.

White spot fungus presents as circular to irregular spots that range from ¼  to ½ inch (6 mm. to 1 cm.) across and scattered across the leaf. It begins as light tan, dry spots and soon turns to papery white lesions on the leaf surrounded by a halo of yellow or pale green. The spots grow and merge. Chlorophyll production is decreased as the green area disappears and soon the leaf begins to yellow and die.

White spot on leafy vegetables can destroy a crop of seedlings or severely deform them. Older plants can survive the loss of their outer leaves.

Cruciferous fungal problems, such as the white spot fungus, are passed along from previously infected plants or surrounding weeds. They are borne on the wind and begin in cool temperatures of 55 to 65 degrees F. (10-18 C.) and rainy weather of early spring, exactly when cruciferous vegetables should be planted. It becomes more severe as the temperatures rise.

There are several things you can do for the control of leaf spot disease in cruciferous vegetables that have nothing to do with sprays or chemical treatments, and the first is sanitation. Fungal spores can overwinter on any organic matter left in the garden. For the smaller garden, this means that all garden debris should be cleared away and disposed of at the end of the season. For larger plots, crop debris should be plowed under after harvest so that the organic matter quickly decays.

While you have no control over rain or temperature, you can plant your seedlings with enough room between them to promote good air circulation and thus faster drying after rain. You can also discourage white spot on leafy vegetables by watering beneath the plants instead of overhead, and clear the ground around your garden plot of weeds that may carry the pathogens.

Crop rotation is another effective method of control of leaf spot in cruciferous vegetables and most other cruciferous plant diseases. Plant your vegetables in a different spot in the garden each year, leaving at least a two year span before returning them to their original space.

One last tip to prevent the spread of white spot fungus: clean your garden equipment regularly and wash your hands after inspecting contaminated plants. This along with the other practices above should help you keep white spot fungus and other cruciferous plant diseases out of your garden.