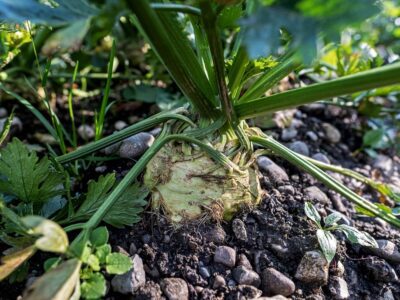 Celeriac — or celery root — is related to celery, as well as carrots, parsley, and parsnips. Celeriac growing conditions are similar to those of celery but with a longer growing season. Is celeriac easy to grow? The following contains information on celeriac growing tips including celeriac diseases and how to use this root vegetable.

Celeriac is a root vegetable with a celery-like aroma and flavor, albeit a bit earthier and sweeter when cooked. Often described as a cross between celery and parsley with the cooked texture of related parsnips, celeriac can be eaten roasted, baked, or raw although the tough outer skin must be removed prior to ingestion.

Dating back to the Middle Ages, celeriac is a form of celery grown for the turgid root that grows at ground level. Unlike celery, this root vegetable popular in European cuisine can be stored for six to eight months or even longer. Celeriac is rich in fiber but low in calories.

Older varieties of celeriac can still be had as well as newer varieties. ‘Alabaster’ has a true celery flavor while ‘Brilliant’ has a smoother, less fibrous root than many other types of celeriac. ‘Giant Prague’ (also called ‘Large Smooth Prague’) originated in 1871 and is still sought after for its large white roots and strong flavor.

‘Marble Ball’ stores well and has a strong celery flavor with light colored, smooth skin. ‘Mars’ celeriac grows large with uniform sized roots and ‘Monarch’ with its smooth exterior is easy to grow and peel and stores well for long periods. ‘Prinz’ is a smaller celeriac producing roots with smooth white skin. ‘Yara’ is slow to bolt.

How to Grow Celeriac

Seeds can be planted in the early spring either outdoors in a cold frame or started indoors. Start seeds four to six weeks prior to transplanting. Be patient as it may take seeds 21 days or longer to germinate.

Celeriac has shallow roots that need to be kept moist, not wet, at all times. A good layer of mulch will help to retain water around the roots as well. Keep the areas around the celeriac plants free from weeds taking care during removal not to damage the shallow roots. A heavy feeder, side dress celeriac halfway through the growing season with compost or fertilize monthly with an all purpose fertilizer.

To encourage larger root formation, snip side roots from the plant and hill soil up over the swollen bulb to blanch it. Blanching will keep the outside of the root white although some varieties will have a brownish hue on the interior.

Celeriac is ready to harvest in 100 to 150 days. It can stay in the ground during light frosts and in fact, the flavor will increase. Do not keep celeriac in the ground into a second year though, as this will create pithy roots.

Cut stems close to the knobby root and then, using a garden fork, lift the roots out when they are about 3 to 4 inches (8-10 cm.) across. Sow a second crop of celeriac in late summer in temperate climates.

As with other root crops, practice crop rotation every one to two years to deter soil borne pests and diseases. Celeriac diseases include leaf blight and celery mosaic. Both early and late blight attack celeriac. To prevent blight, soak seeds in a formaldehyde solution for 30 minutes prior to planting. Celery mosaic results in yellow, mottled leaves and is fostered by aphids so be sure to manage these pests.

Along with aphids, celeriac may be attacked by slugs and snails which can be handpicked from the plants. Leaf miners are also fond of celeriac. Pick off any yellowing leaves showing the tunneling of miners. Cutworms are also known to attack celeriac. Use plant collars and diatomaceous earth to combat cutworms.

Otherwise, mind the watering. Irregular irrigation can result in stunted roots. Lastly, don’t panic if all your celeriac seeds do not germinate; it is incredibly rare for all seeds to germinate. Over sow to ensure mature plantings.