Learn About Blanching Celery In The Garden 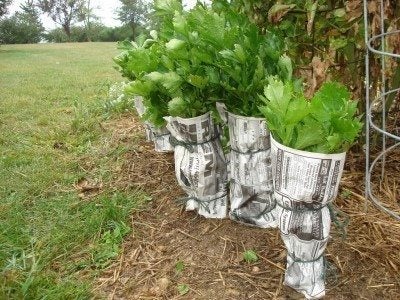 Simply put, celery isn’t the easiest crop to grow in the garden. Even after all the work and time involved with growing celery, bitter celery is one of the most common complaints at harvest time.

When celery has bitter taste, chances are it hasn’t been blanched. Blanching celery is often done to prevent bitter celery. Blanched plants lack green color, as the light source of celery is blocked out, which results in a paler color.

Blanching celery does, however, give it a sweeter taste and plants are generally more tender. Although some self-blanching varieties are available, many gardeners prefer to blanch celery themselves.

There are several methods for blanching celery. All of which are accomplished two to three weeks prior to harvesting.

Blanching is a good way to rid the garden of bitter celery. However, it’s not considered as nutritious as regular, green celery. Blanching celery is, of course, optional. Bitter celery may not taste that great, but sometimes all you need when celery has bitter taste is a little peanut butter or ranch dressing to give it some additional flavor.