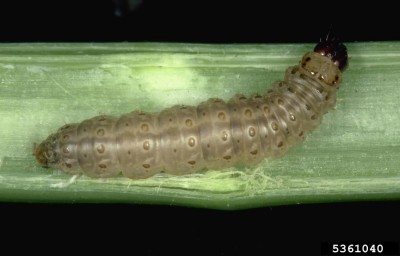 The European corn borer was first reported in the United States in 1917 in Massachusetts. It was thought to have come from Europe in broomcorn. This insect is one of the most damaging corn pests known in the United States and Canada, causing over one billion dollars of damage to corn crops annually. Even worse, corn borers don’t limit their damage to corn and can damage over 300 different garden plants including beans, potatoes, tomatoes, apples, and peppers.

Also known as the corn root borer, these destructive pests do their damage as larva. Young larvae eat leaves and munch on corn tassels. Once they are done eating leaves and tassels, they tunnel their way into all parts of the stalk and ear.

The 1 inch (2.5 cm.) long, fully mature larvae are flesh colored caterpillars with a red or dark brown head and distinct spots on each body segment. These fully grown larvae spend the winter in plant parts that they have been eating.

Pupation happens in late spring, and adult moths appear in May or June. Mature female moths lay eggs on host plants. Eggs hatch as soon as three to seven days and the young caterpillars begin to eat the host plant. They are fully developed in three to four weeks. Pupation takes place inside corn stalks and second-generation moths start laying eggs early in the summer to begin yet another corn borer life cycle.

Depending on the climate, there could be one to three generations with the second generation being most destructive to corn.

It’s imperative to shred and plow under cornstalks in fall or early spring before the adults have a chance to emerge.

Other known corn borer control methods include using garden insect sprays to kill young caterpillars. It is important to spray plants every five days until tassels start to brown.

Another beneficial corn borer treatment method involves keeping garden and surrounding areas free of weeds. Moths like to rest and mate on tall weeds, which will increase the number of eggs laid in your garden area.