Fixing Knocked Over Corn: What To Do When Corn Is Bent Over 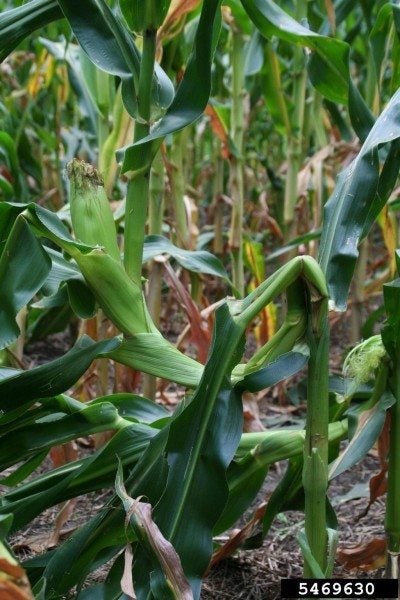 Summer storms can wreak havoc in the home garden. While the rain accompanying the storm is welcome, too much of a good thing can batter foliage, sometimes irreversibly. Tall stands of corn are particularly susceptible to heavy rain, not to mention the almost synonymous winds, leaving one to wonder how to save knocked over corn. Can you restore bent corn plants?

Can I Restore Bent Corn Plants?

If rain or wind blew corn over, fixing the knocked over corn may be a question of how severely the plants are damaged. Often the corn is bent over at a 45-degree angle at the very least, sometimes it has been battered down to the ground.

When the corn stalks are mildly bent over, they may just rebound themselves given a bit of time. Maybe you need to mound a bit of dirt around the base to aid in straightening them up. In more severe cases, you may need to stake the stalks when fixing the knocked over corn.

How to Save Knocked Over Corn

You should primarily be concerned with corn that has been blown over if fertilization has not been completed. Leaning stalks will prevent the pollen from drifting down the tassels to the silks, thwarting pollination. If this is the case, the stalks should be straightened.

If the wind blew corn over rather spectacularly, the roots of the corn may be pulled from the soil. When root systems lose half their contact with the soil, the term “root lodging” is used. Plants that are root lodged can often regenerate new roots and orient upright on their own, hopefully before pollination.

Corn plants usually get bent stems after severe wind or rain after pollination when the stalks are stronger, and yet carrying the weight of ears of corn. Straighten the plants and stake them with bamboo poles and plastic wire ties, then keep your fingers crossed. If two people are available, sometimes you can get a line on either end of a row and pull an entire row up. Tamp down around the roots or water at the base of the plants to push any loose soil around the roots and fill any air pockets near them.

Most of the time, corn stalks will straighten themselves out within a week, especially if they have yet to tassel and aren’t too heavy. Even so, if the ears are near maturity, leave the plants alone since they are almost ready to harvest anyway. Depending upon the severity of damage, sometimes helping the corn out by trying to straighten it does more harm than good. You may end up breaking or bending the stems even worse.

Large commercial corn fields tend to have less damage due to the density of the plantings. The home gardener’s relatively small plot tends to get the brunt. If your region is prone to these sudden storms, a good idea is to bury the stem of the corn in a deep layer of compost. This will not only give excellent nutrition to the roots, but aid in supporting the stalk in general.