Tips For Harvesting Corn: How And When To Pick Corn 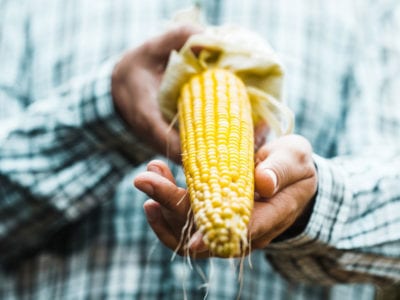 Gardeners are willing to devote time and garden space to growing corn because fresh-picked corn is a treat that tastes much better than grocery store corn. Harvest corn when the ears are at the peak of perfection. Left too long, the kernels become hard and starchy. Read on for corn harvesting info that will help you decide when the time is right for harvesting corn.

When to Pick Corn

Knowing when to pick corn is one of the most important factors for a quality crop. Corn is ready for harvest about 20 days after the silk first appears. At harvest time, the silk turns brown, but the husks are still green.

Each stalk should have at least one ear near the top. When conditions are right, you may get another ear lower down on the stalk. The lower ears are usually smaller and mature a little later than the ones at the top of the stalk.

Before you begin picking the corn, make sure it is in the “milk stage.” Puncture a kernel and look for milky liquid inside. If it’s clear, the kernels aren’t quite ready. If there is no liquid, you’ve waited too long.

How to Pick Sweet Corn

Corn is best when you harvest it early in the morning. Grasp the ear firmly and pull down, then twist and pull. It usually comes off the stalk easily. Harvest only as much as you can eat in a day for the first few days, but make sure you harvest the entire crop while it is in the milky stage.

Pull up the corn stalks immediately after harvest. Cut the stalks into 1-foot (30 cm.) lengths before adding them to the compost pile to hasten their decay.

Some people claim that you should put the water on to boil before going to the garden to harvest the corn because it loses its fresh-picked flavor so quickly. Although the timing isn’t quite that critical, it tastes best soon after harvest. Once you pick the corn, the sugars begin converting into starches and in a week or so it will taste more like the corn you buy in the grocery store than garden fresh corn.

The best method of storing fresh picked corn is in the refrigerator, where it keeps for up to a week. If you need to keep it longer it’s best to freeze it. You can freeze it on the cob, or cut it off the cob to save space.