No Ears On Corn Stalks: Why Is My Corn Not Producing Ears 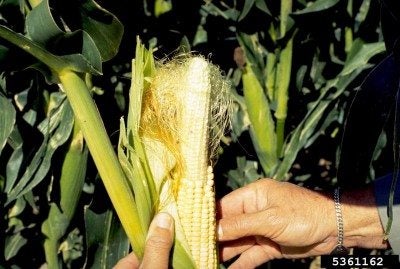 We’re growing corn this year and it’s sort of awe-inspiring. I swear I can practically see it growing right before my eyes. As with everything we grow, we hope the outcome will be some juicy, sweet corn for late summer BBQs, but I’ve had some problems in the past, and maybe you have too. Have you ever grown corn plants without ears?

Why is My Corn Not Producing Ears?

A corn plant not producing could be the result of climate changes, disease, or insect problems that are affecting the plant’s ability to pollinate properly, which may cause it to not be forming healthy ears or any ears at all. To fully answer the question, “Why is my corn not producing ears,” a lesson in corn reproduction is in order.

Corn plants produce individual male and female flowers, both of which start out as bisexual. During the flower’s development, the female traits (gynoecia) of the male flowers and male features (stamens) of the developing female flower terminate. The end result is a tassel, which is male, and an ear, which is female.

Silks that emerge from the ear are the stigma of the female corn flower. Pollen from the male flower adheres to the end of the silk, which grows a pollen tube down the length of the stigma to reach the ovary. It’s basic 101 corn sex.

Without proper production of silk or sufficient pollination, the plant won’t produce kernels, but what causes the plant to produce no ears of corn at all? Here are the most probable reasons: