What Is Dent Corn: Planting Dent Corn In The Garden 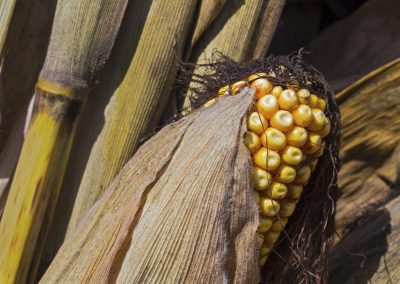 Corn is one of the most adaptable and varied members of the grass family. Sweet corn and popcorn are grown for human consumption but what is dent corn? What are some of the uses for dent corn? Read on to find out about planting dent corn and other pertinent dent corn information.

What is Dent Corn?

Corn – the only important cereal grain indigenous to the Western hemisphere. There are three major types of corn cultivated in the United States: grain or field corn, sweet corn, and popcorn. Grain corn is classified into four main types:

Dent corn, at maturity, has an obvious depression (or dent) at the crown of the kernels. The starches within the kernels are of two types: at the sides, a hard starch, and in the center, a soft starch. As the kernel ripens, the starch in the center shrinks causing the depression.

Dent corn may have kernels that are long and narrow or wide and shallow. Dent corn is the most common type of grain corn grown in the United States.

As mentioned above, popcorn and sweet corn are grown as food for us corn lovin’ humans. What are dent corns uses though? Dent corn is used primarily as animal feed, although it is grown for human consumption as well; it just isn’t the type of corn that we eat right off the cob. It tends to be less sweet and starchier than the sweet corn varieties and is used in products that are either dry or wet milled.

Dent is a cross between flour and flint corn (more specifically, Gourdseed and early Northern Flint), and most heirloom corns from the Southeast and Midwest states are dent corns. Most varieties of dent corn are yellow, although there are white varieties as well, which tend to command a premium price in the dry milling industry.

Flour corns are most common in the Southwest and are most often ground finely and used in baking, while flint corns are more common in the Northeast and used for making polenta and johnnycakes. Dent corns, being made up of both, are excellent for any of the above uses and are good roasted or made into grits.

If you want to truly make your own grits from scratch, here’s information about how to grow your own dent corn.

How to Grow Dent Corn

Corn is a nitrogen hog and may need to be fertilized several times for optimal yield. Keep the plants watered regularly.

Dent corn is fairly insect resistant due to their very tight husks.

Harvest dent corn when the ears are full sized for fresh corn or when the husks are completely yellow and dry for dry corn.