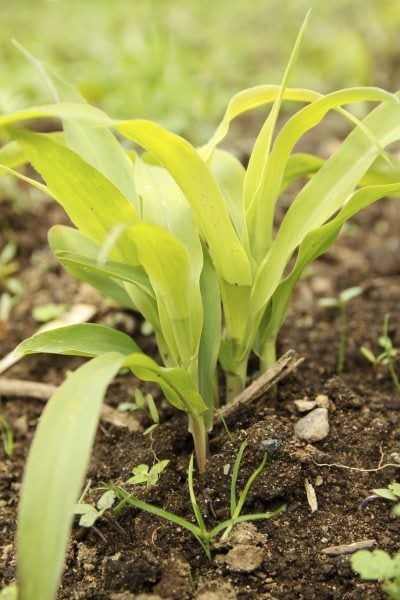 Corn is one of the most popular crops to grow in the home garden. Not only is it delicious, but it is impressive when all goes well. Since this life we lead is unpredictable even with the best laid plans, you may find that your corn plants have yellowing corn leaves. What causes corn plant leaves to turn yellow and how do you go about treating yellowing corn plants?

We’ve been growing corn for the last few years with varying success. I’ve chalked it up to our generally cool summers and the fact that the huge pine trees in the backyard are blocking most of our sun in the veggie garden. So, last year we grew corn in containers on the patio with full sun exposure. Bingo! Of course, we decided to grow our corn in containers again this year. Everything was going swimmingly until almost overnight we noticed the corn leaves were turning yellow.

So I turned to the handy dandy internet to find out why my corn plant was turning yellow and learned that there were a few possibilities.

First of all, corn is one of the heaviest feeders in the garden. Yellowing corn leaves are most probably an indicator that the crop is deficient in some nutrient, usually nitrogen. Corn is a grass and grass thrives on nitrogen. The plant moves nitrogen up the stalk so a nitrogen deficiency manifests itself as corn leaves turning yellow at the base of the plant. A soil test can help you determine if your plants are low in nitrogen. The solution is to side dress with a high nitrogen fertilizer.

Cool weather can also make corn plant leaves turn yellow. Again, this is due to a lack of nitrogen. When soil is cool and wet, the corn has trouble absorbing nitrogen from the soil. So this doesn’t mean there is no nitrogen in the soil, simply that the poor plants are too chilled to efficiently take up enough. The good news is that if cool weather is the culprit the plants will grow out of this yellowing as the weather warms up.

Insufficient water will also result in yellow leaves. Corn needs a lot of water, at least once weekly and depending upon the weather up to every day. This was a likely case for our corn yellowing, given that is was container grown and received full sun for most of the day.

Disease, such as maize dwarf mosaic virus, can also cause yellowing of leaves combined with stunted growth. This disease is spread by aphids lurking in nearby weeds, such as Johnson grass. Once the plants are infected, it’s over. Remove and destroy the canes and sterilize any tools or work gloves that have come into contact with them.

Nematodes also can contribute to yellowing corn leaves. Again, this has to do with a lack of nutrients. The nematodes, microscopic roundworms, live in the soil and attach themselves to the plant’s roots, preventing it from absorbing enough nutrients.

If your soil test indicates a lack of nitrogen, side dress with a high nitrogen fertilizer when the plants have 8-10 leaves and again when the first silk appears.

Keep the corn watered on a regular basis. Again, at least once a week and up to once per day to keep the soil moist one inch below the surface. We had an extremely, unusually warm summer with temps into the 90’s (32°C), so we even watered twice a day since our corn was in containers. Use soaker hoses and mulch the soil with 2 inches (5.0 cm.) of grass clippings, straw, cardboard or newspaper to reduce evaporation. Prior to planting, amend the soil with plenty of compost and peat moss.

Keep the area around the corn free of weeds to deter insects and disease. Rotate your corn crop if nematodes seem to be the problem. If nematodes seem to be in all areas of the garden, you may need to solarize. This involves covering the garden with clear plastic during the 4-8 hottest weeks of summer. Rather a bummer that you won’t have a garden, but this kills the nematodes as well as weeds and soil pathogens.