Cucumber With Holes: What Causes Holes In Cucumbers 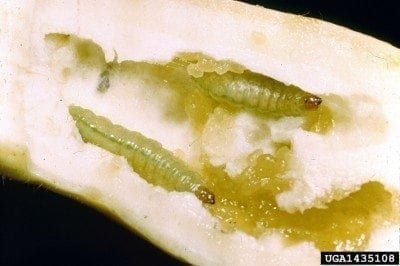 Nothing’s more disappointing than cucumbers with holes. Picking a cucumber with holes in it is a fairly common problem. What causes holes in cucumber fruit and how can they be prevented? Read on to find out.

What Causes Holes in Cucumbers?

Some cucumbers are almost hollow inside, which is usually due to improper irrigation or a lack of water. However, a cucumber with holes riddling it is most probably due to an insect of some kind.

In my neck of the woods, the Pacific Northwest, the most likely culprit for cucumber holes may be slugs. These guys will eat almost anything and will drill holes through both green and ripe fruit. Sprinkling some slug bait around the plants, however, will likely keep them away from your cucumber plants.

As the name suggests, cucumber beetles can be very damaging to not only cucumber but other cucurbits such as melons, pumpkins, and squash. Cucumber beetles have no preference and will ravage all parts of the plant from foliage to flowers to fruit. They are found throughout the growing season (June-September) but are more likely to cause scarring rather than outright cucumber holes.

Additionally, cucumber beetles transmit bacterial wilt in cucumbers. Bacterial wilt overwinters in the intestines of the pests and is then transmitted from plant to plant as the beetle feeds. Some new varieties of cucurbits have resistance to this disease.

Handpicking any of these pests is time-consuming but effective. Otherwise, the use of fabric row covers is an effective barrier between the pests and plants. Keep the garden free of weeds so the beetles have fewer places to hide. There are also some predatory insects that may be able to aid in the eradication of the beetles. An application of Neem oil or Pyrethrin can eradicate the pests, as well as a number of chemical pesticides.

Lastly, pickleworms may be the cause of cucumbers with holes. Pickleworms attack most cucurbits — cucumbers, cantaloupes, summer squash, and pumpkins may all be severely damaged by the pickleworms’ voracious appetite. Pickleworms aren’t picky and will tunnel through not only fruit but also flowers, buds, and stems. Damaged fruit is not edible.

In warmer regions, pickleworms overwinter while in colder areas, the pests freeze during the winter. They go through a complete cycle of egg, larva, pupa, and adult. Eggs are irregular in shape and look something like grains of sand. They are laid on leaves in small batches and hatch in three to four days.

The resulting larvae feed on buds, blossoms, and tender foliage before they begin on fruit. These brown-headed caterpillars molt four times. At the last molt, the caterpillar loses its reddish-brown spots and becomes entirely green or copper in color. It then stops feeding and spins a cocoon to pupate. Pupae are usually found in a curled or rolled leaf and emerge as adults in seven to 10 days as brownish-yellow moths with a hint of purple.

Choose early maturing varieties and plant as soon as possible before the pickleworm population explodes. To control the populations, also destroy any damaged fruit and squash any rolled sections of leaves that contain pupae. Some less toxic or natural controls include Bacillus thuringiensis, Pyrethrin, Neem oil extract, and Spinosad as well as other chemical pesticides.