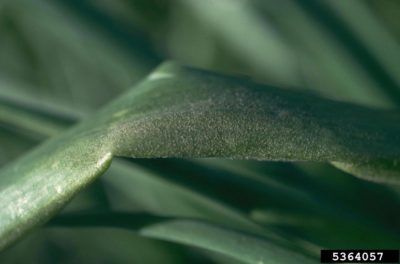 The pathogen that causes onion downy mildew has the evocative name Peronospora destructor, and it truly can destroy your onion crop. In the right conditions, this disease spreads quickly, leaving destruction in its path. There are ways to prevent it and manage it if you see the early signs, however.

Onions, garlic, chives, and shallots are all susceptible to being infected by the fungus that causes this type of downy mildew. The fungus overwinters in the soil in many locations, which means that it can become endemic in a garden or field, ruining crops year after year. The spores of the fungus spread and cause infection, especially in conditions that are cool, humid, and moist.

Onions with downy mildew have leaves with irregular spots ranging from pale green to yellow to brown in color. The seed stalks may also be affected. Both leaves and stalks may also host the spores of the fungus, which are initially gray and then become violet. Eventually, the leaf tips will die, and the leaves will collapse entirely, with the spores taking over the dead tissue.

The impact on the edible bulb of the onion plant will be reduced size and it will develop a spongy texture. The bulb will not keep for as long as it normally would. Although the downy mildew doesn’t often kill the entire plant, it does reduce yield and results in onions of greatly lessened quality.

There are several ways you can prevent this disease in your onion and related plants:

Use onion varieties that are resistant to downy mildew. Use high-quality bulbs, seeds, and sets to start your garden. These are more likely to be disease-free. The infection often begins with infected plants and seeds.

Space plants adequately to allow for airflow. Avoid watering plants when they will not have a chance to dry quickly, such as in the evening or in very humid conditions.

The only real way to eliminate downy mildew in onion plants is to spray them with a fungicide. Dithiocarbamate fungicides are used for downy mildew on onions.

If you do get an infection that takes hold in your garden, try crop rotation. Plant something that resists onion downy mildew next year so that the fungus has nothing to grow on. Since this pathogen can survive most winters, it is also important to practice good garden hygiene, collecting and destroying dead onion matter at the end of the season.