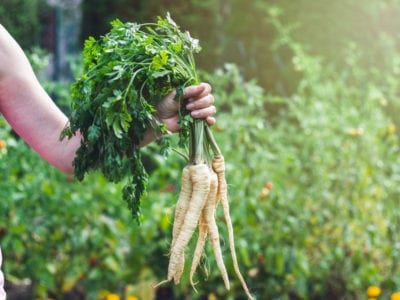 Parsnips are grown for their sweet, earthy tap roots. Biennials that are grown as annuals, parsnips are as easy to grow as their cousin, the carrot. Easy to grow they may be, but not without their share of diseases and pests. One such disease, parsnip leaf spot results in exactly what it sounds like– parsnips with spots on the leaves. While leaf spots on parsnips do not infect the root of the plant, parsnips with leaf spots will be more susceptible to other diseases and pest injury than healthy plants.

What Causes Spots on Parsnips?

Leaf spot on parsnips is usually caused by the fungi Alternaria or Cercospora. The disease is favored by warm, wet weather where leaves are moist for lengthy periods of time.

Parsnips with spots on their leaves may also be infected with another fungus, Phloeospora herclei, which is primarily observed in late summer or early autumn crops in the United Kingdom and New Zealand.

In the case of leaf spot due to Alternaria or Cercospora, the disease shows as small to medium spots on the leaves of the parsnip plant. At onset they appear yellowish in color and later turn brown, merge together, and result in leaf drop.

In the case of P. herclei, the fungus overwinters on infected debris and certain weeds. It is spread by splashing water and direct contact. There is no chemical control for this fungus. Management includes removal of infected plants and debris, weed control, and wide row spacing.

With leaf spot as a result of Alternaria or Cercospora, fungal sprays can be applied at the first sign of infection. Since sustained leaf wetness fosters the spread of the disease, allow for wide row spacing to permit air circulation so that leaves can dry more rapidly.

Printer Friendly Version
Read more about Parsnips
<PreviousNext>
Did you find this helpful? Share it with your friends!
FacebookTweetPinEmail
Related Articles
Newest Articles
You might also like…
Additional Help & Information