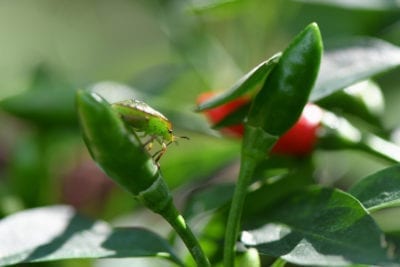 Growing hot peppers is an easy way to add to your culinary garden. Different varieties of chili peppers grow well in both containers and beds. A few hot pepper problems may damage your plants though. Know what to look out for and what diseases and pests could ruin your harvest this summer so you can prevent or treat as needed.

There are many potential problems with hot pepper plants that you will find are caused by viral, fungal, or bacterial diseases. Several viral diseases affect chili peppers. Signs of a viral infection include leaf curl, mottled coloring on leaves, stunted growth, and dropped flowers. The best way to manage these diseases is to start with virus-resistant varieties.

Fungal diseases that affect pepper plants include damping off fungi in seedlings and Phytophthora root rot. The latter causes root rot in plants at any stage and results in wilting and death. Anthracnose fungi will cause spotting on leaves. Prevent fungal infections with well-drained soil, thorough cleanup of garden waste in the fall, and plenty of room between plants for air circulation. To manage existing fungal diseases, use a fungicide recommended by your local county extension office.

There are several pests that will attack hot pepper plants and cause varying degrees of damage. Early in the growing season look for damage to leaves caused by cutworm or flea beetle infestations. Later, you may see aphids collecting on the undersides of leaves.

Other insects that may damage your pepper plants include beet armyworm, loopers, and corn earworm. Insects may feed on and damage leaves, limiting photosynthesis or exposing peppers to sunscald. Some will also feed on the peppers.

Insect infestations can cause a lot of harm to pepper plants. Keep an eye on your plants regularly to try to catch early signs of pests. You may be able to remove them by hand, but if the infestation becomes severe, use of insecticide may be the only way to save plants.

You may also have some issues with your peppers that are not related to pests or infections. For instance, if you see that the plants fail to fruit, weather may be the culprit. Early cold can prevent fruit set, so avoid planting peppers outside until after the last frost of spring.

Later in the growing season fruit set may be disrupted by very hot, dry weather. Watering your peppers regularly in a hot summer is essential.

A common problem in peppers is blossom end rot. It causes rot on the ends of peppers.