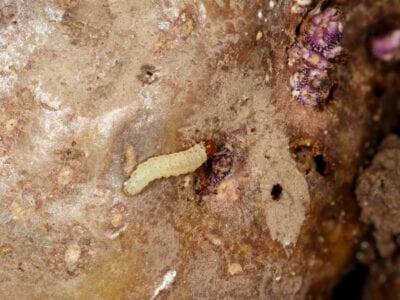 Okay. What is it? The potatoes you planted were looking green and lush above the soil surface, but underground it’s a different story. Seems someone beat you to the tuber bounty. Upon closer inspection and a little research, at last, a name for this pilferer– the potato tuberworm or Phthorimaea operculella is revealed.

The question, “What are potato tuberworms” is a little bit more involved than the short answer of “pests.” Commonly found in tropical to subtropical regions, potato tuberworms are actually larvae, or at least it is this stage of the insect that wreaks the most havoc on your spuds.

Potato tuberworm adults are small moths that lay tiny oval eggs of white to yellow hue. Once hatched and full grown, the resulting larvae are caterpillars, which vary in color and feed upon leaves and stems. Potato tuberworm damage doesn’t end there though.

Potatoes that are shallowly set or exposed due to cracked soil are those most often assaulted and the longer they remain in the ground post vine kill, the worse it gets.

Any of these practices may reduce the exposure of the potatoes to egg laying female moths, thus reducing potato tuberworm damage and aiding in preventing tuberworms in potato crops.

Controlling potato tuberworms via an organic method of eradication is accomplished utilizing predatory insects like braconid wasps, which kill the larvae by parasitization.

Beneficial nematodes may also be introduced and are an environmentally friendly method of potato worm control. These nematodes seek out and kill soil inhabiting potato tuberworm larvae without harming beneficial insects, such as ladybugs or earthworms. They can be found for sale online.

When all else fails for potato worm control, there are pesticides that may be applied (with mixed results) to aid in their eradication. If one is attempting to be strictly organic, I have read of the Entrust formulation of spinosad, which may have some good results.

Additionally, the use of pheromone traps can detect potato tuberworm moth activity and help to pinpoint the correct timing for insecticide control. A simple pan of soapy water with a lid for hanging the pheromone bait can be placed among the potato crop in the garden or a sticky trap may be used to capture the moths.

Insecticide must be used before vine kills or it will have no efficacy. Insecticides for controlling potato tuberworms should be used in the evening during the moths’ most active time and can be found at one’s local garden center.

You should try to utilize cultural methods for preventing tuberworms in potato crops such as irrigation to prevent soil cracks, planting uninfected seed pieces, and deep seating of tubers before attempting to use an insecticide for controlling potato tuberworms.