How To Grow Potatoes In Water 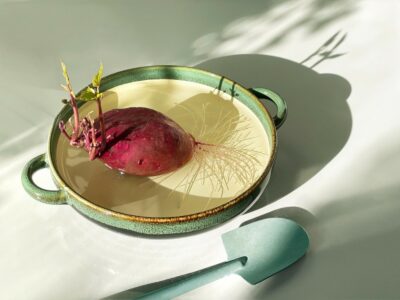 Grab the kiddos and celebrate National Potato Day on August 19 by growing a potato in a jar or glass. This fun experiment is not only a great way to introduce the little ones to gardening, but also a way to sneak in a botany lesson for older youth. This method can also be used to sprout Irish potato plants or produce sweet potato slips for the garden.

How to Grow a Potato in Water

Although potatoes grow underground, they are actually modified stems designed to store starch. This starch can be used as an energy source for reproduction. While potato plants can form seeds, they are usually propagated by vegetative means. In other words, new potato plants grow from the buds or eyes which form on the potato tuber.

Follow these easy steps to grow potatoes in water:

Step one: Choose a potato which has sprouted a few eyes.

Step three: Next, place another 2 to 3 toothpicks in an evenly spaced circle around the potato.

Step five: Set the glass in a sunny, warm location. Keep the jar filled with water.

Step six: Check on the potato daily. In a few weeks, roots will begin to grow from the underwater buds. Soon after, the potato will send up shoots on which leaves will form.

Step seven: Once the new plant has several leaves, it can be transplanted into a pot or the garden.

The Sweet Potato in Water Experiment

Step one: Locate the proximal end of the sweet potato. (Hint – It’s the narrow end which  was attached to the mother plant.)

Step two: As with the Irish potato, encircle the sweet potato with 3 to 4 toothpicks about 2/3 of the way from the proximal end.

Step three: To grow a sweet potato in water, suspend the root in a glass with the proximal end pointing up. Fill the glass so that the bottom third of the sweet potato root is underwater. Set the glass in a sunny window and maintain the water level by periodically adding water.

Step four: In a few weeks, roots will form at the bottom of the sweet potato. This will be followed by stem formation or “slips” at the proximal end.

Step five: When the slips are 6 to 8 inches (15-20 cm.) tall, snip them from the sweet potato using sharp scissors or a knife. Place the slips in a glass of water to root. Once the slips have 2 to 3 inch roots (5-7.6 cm.), they can be planted in a pot. Transfer the plants to the garden once all danger of frost has passed.